Death toll in Indonesia quake climbs to 142 as tourists flee 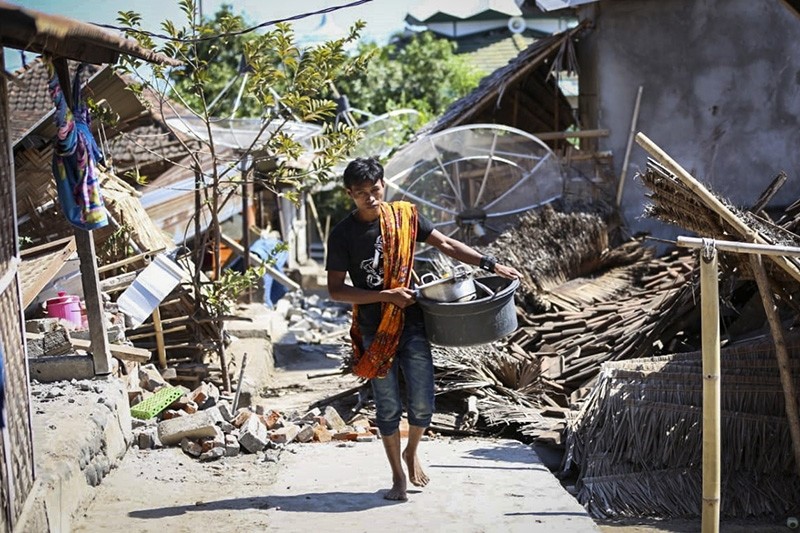 An Indonesian man collects his belongings from his collapsed house after an earthquake struck in North Lombok, West Nusa Tenggara, Indonesia, Aug. 6, 2018. (EPA Photo)
by Compiled from Wire Services Aug 06, 2018 12:00 am

The death toll from an earthquake on Indonesia's Lombok island has risen to 142, a local government official said Monday.

Sutopo Nugroho, spokesman for the National Disaster Management Agency, declined to confirm the report. He put the official death toll at 91, but said it was sure to increase.

He said that thousands of homes and other buildings were damaged in Sunday's quake, forcing residents to seek refuge elsewhere.

The districts of North Lombok, East Lombok and Mataram were the hardest hit, Nugroho said, adding that most of the victims "died after being hit by debris from collapsing buildings."

The earthquake flattened a two-story mosque where locals had been praying, but rescuers were not able to retrieve the victims due to lack of heavy equipment, Nugroho added.

Some areas still hadn't been reached, with rescuers hampered by collapsed bridges, electricity blackouts and damaged roads blocked with debris.

An operation was also underway Monday to evacuate some 1,200 tourists from the Gili Islands, three tiny, coral-fringed tropical islands a few kilometers off the northwest coast of Lombok that are particularly popular with backpackers and divers.

Margret Helgadottir, a holidaymaker from Iceland, described people screaming as the roof of her hotel on Gili Air collapsed when the quake struck.

"We just froze, thankfully we were outside," she told AFP tearfully from a harbor in Lombok where she had been evacuated to. "Everything went black, it was terrible."

"We cannot evacuate all of them all at once because we don't have enough capacity on the boats," Muhammad Faozal, the head of West Nusa Tenggara's tourism agency, told AFP, adding two navy vessels were on their way.

"It's understandable they want to leave the Gilis, they are panicking."

Local disaster officials said 358 tourists had been evacuated so far. At least one person, an Indonesian holidaymaker, was killed on the Gili islands while another tourist died on nearby Bali.

But it was Lombok which bore the brunt of Sunday evening's quake.

The shallow tremor sent thousands of Lombok residents and tourists scrambling outdoors, where many spent the night as strong aftershocks including one of 5.3-magnitude rattled the island.

The quake knocked out power in many areas, and parts of Lombok remained without electricity on Monday.

Nugroho said up to 20,000 people may have been evacuated from their homes on Lombok and paramedics, food and medication were badly needed.

Hundreds of bloodied and bandaged victims were treated outside damaged hospitals in the main city of Mataram and other hard-hit areas.

Patients lay on beds under wards sent up in tents, surrounded by drip stands and monitors, as doctors in blue scrubs attended to them.

Anguished relatives were huddled around loved ones in front of the main clinic in Mataram, as medical staff struggled to cope with hundreds of patients. Many were yet to be seen despite spending the night out in the open.

"I feel restless sleeping in a tent, I can't be at peace," Nurhayati told AFP outside one hospital where she had brought her sick 70-year-old mother.

"What we really need now are paramedics, we are short-staffed, we also need medications," Supriadi, a spokesman for Mataram general hospital, told AFP.

The rubble-strewn streets of Mataram were empty save for a few survivors picking nervously through the ruins.

The quake triggered a tsunami warning and frightened people poured out of their homes to move to higher ground, particularly in North Lombok and Mataram, the capital of West Nusa Tenggara province. The warning was lifted on Sunday after only small waves were recorded.

"I was watching TV when I felt a big shake," said Harian, a Lombok woman who gave one name. "The lamp was shaking, and people were shouting 'Get out.' I ran out into the dark because the power cut off."

The Bali and Lombok airports continued operating Sunday night, according to the director general of civil aviation. There had been a half-hour evacuation at the Lombok airport following the quake because the electricity went off. TV showed crying women consoling each other outside Lombok's airport.

Model Chrissy Teigen, who was in Bali with singer-husband John Legend and their two children, live-tweeted the shaking.

"Bali. Trembling. So long," Teigen tweeted to her 10.6 million followers.

Several hours later, she asked news organizations not to write more stories about her lively stream-of-consciousness tweets, suggesting media share information to help those who need it instead.

Like Bali, Lombok is known for pristine beaches and mountains. Hotels and other buildings in both locations are not allowed to exceed the height of coconut trees.

Indonesia is prone to earthquakes because of its location on the Pacific "Ring of Fire," an arc of volcanoes and fault lines in the Pacific Basin. In December 2004, a massive magnitude 9.1 earthquake off Sumatra island triggered a tsunami that killed 230,000 people in a dozen countries.