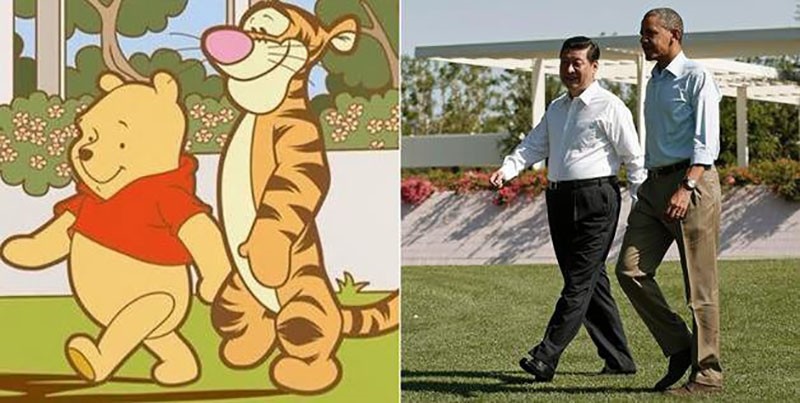 A meme that spread on social media comparing Chinese President Xi Jinping to Winnie the Pooh.
by Daily Sabah Aug 07, 2018 12:00 am

While Winnie the Pooh may seem like a harmless, jolly cartoon character, China fears he may be harming the image of President Xi Jinping.

The Chinese government has banned the release of the new movie "Christopher Robin," after Chinese social media users continued to compare the president to the plump bear.

The sore spot dates back years before the new movie, which stars Ewan McGregor and a CGI Winnie the Pooh, to a cheery meeting between Xi and U.S. President Barack Obama in 2013. A photo of the pair walking together inspired a meme, including a portly Pooh and lanky Tigger.

Since then, Chinese censors have blocked images of Pooh on social media, even calling one meme of Xi at a military parade "a serious effort to undermine the dignity of the presidential office and Xi himself." The meme became the most censored image of 2015, according to Global Risk Insights.

In July, China blocked the U.S. television network HBO's website after comedian John Oliver poked fun at Xi over his sensitivity to the Pooh comparisons.

Some think the movie's rejection may be due to the fact that China only releases 34 foreign films in theaters each year, leaving Hollywood flicks competing for limited spots.

"Christopher Robin" is Disney's second film to be blocked this year, after "A Wrinkle in Time" was also denied release.