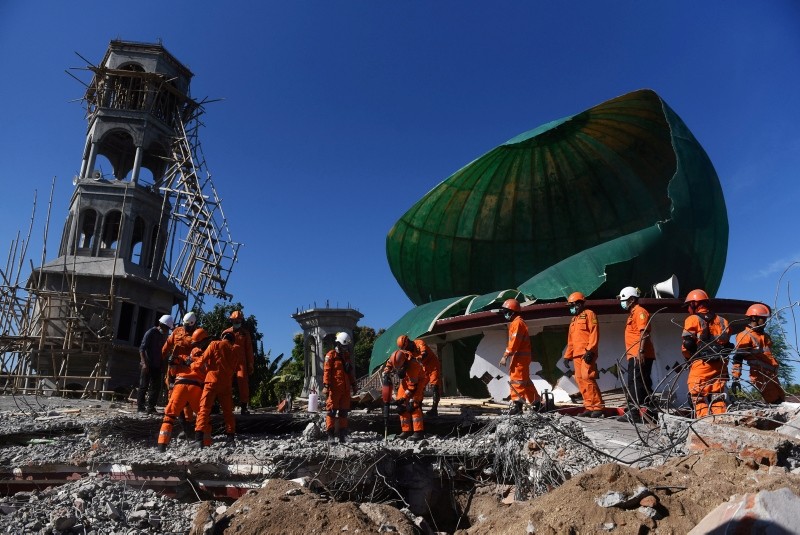 Rescue workers search for victims in a mosque which was damaged in Sunday's earthquake in Tanjung, North Lombok, Indonesia August 7, 2018. (Antara Foto via Reuters)
by Associated Press Aug 07, 2018 12:00 am

Soldiers have pulled a man alive from the rubble of a large mosque flattened by an earthquake on the Indonesian island of Lombok, while thousands of homeless locals waited for aid Tuesday and stranded tourists camped at beaches and in the lobbies of damaged hotels.

The north of Lombok has been devastated by the magnitude 7.0 quake that struck Sunday night, killing at least 105 people, seriously injuring more than 230 and destroying thousands of buildings. Two days after the quake, rescuers were still struggling to reach all the affected areas and authorities expected the death toll to rise.

Disaster officials have not said how many people they believe are buried beneath the ruins of the Jabal Nur mosque in Lading-Lading but the village head, Budhiawan, said about 30 based on unclaimed belongings left outside the mosque.

Muhamad Juanda, who narrowly escaped, said 100 people were inside praying when the earth began to roll. Many got out but dozens were trapped, he said.

"When the earthquake happened, I stopped praying with dozens of other people. I stayed during the first shock, but the shock grew stronger and we rolled around trying to run out," he said.

Video shot sometime Monday by a soldier showed rescuers shouting "Thank God" as a man was pulled from a space under the mosque's flattened roof and staggered away from the ruins supported by soldiers.

"You're safe, mister," said one of the soldiers as emotion overcame the man, clad in Islamic robes, and villagers crowded around him.

Disaster agency spokesman Sutopo Purwo Nugroho said he hopes "a lot" of people can be saved from the mosque. Two people were rescued from the debris Monday including a woman with a broken leg, said villager Supri Yono, and three were found dead. An AP reporter saw one body recovered Tuesday.

"We're forced to deal with broken bones in the traditional way at home because the hospital had to deal with hundreds of other injuries," said Budhiawan, the village head.

Aid organizations, already on Lombok after it was hit a week earlier by a 6.4 quake that killed 16 people, said they were stepping up their humanitarian efforts.

Oxfam said more than 20,000 people were in temporary shelters and thousands more were camping out in the open. It said clean drinking water was scarce because of a recent spell of extremely dry weather in Lombok. Food, medical supplies, tarpaulins and clothes are also urgently needed, it said.

The lush countryside of northern Lombok is pockmarked with collapsed homes and shops and damaged mosques. Thousands of people sat on roadsides outside their houses under blue makeshift tents and tarps, too afraid to stay inside because of aftershocks or their homes now uninhabitable.

In the northern town of Tanjung, rescue workers in orange uniforms spent a second day trying to recover a body from the rubble of a destroyed home as a foul stench rose above it.

The brother-in-law of the dead man complained that authorities have not brought in heavy equipment that it is desperately needed.

"I want him to be pulled out of there immediately. But they're working too slow," said Masin, the brother-in-law, as ambulances passed by, sirens wailing.

Behind him, the rescuers, a dozen of them, were drilling into a flattened concrete wall. They had already used saws to cut a square out of the slab but could not find the body.

"The body is pinned underneath. We brought in sniffer dog and used saws and a drill but we can't figure out where he is," said Aprintinus Titus, a rescue worker from the National Search and Rescue Agency.

"We will not give up until we pull him out of this rubble. We know how hard his family is suffering," said Titus.

Hundreds of tourists and workers were still struggling to get off three outlying resort islands where power was cut off and hotels and hostels were damaged. Nugroho said more than 4,600 foreign and Indonesian tourists had been evacuated from the islands, with ships taking people to ports in Lombok and Benoa, Bali.

British tourist Saffron Amis, who was stranded on Gili Trawangan island, said she spent a second night outdoors as aftershocks rattled the region before finally securing space on a boat.

"We slept in a bungalow until another quake hit us at midnight and then we moved to the beach," she said.

At Lombok's airport, dozens of tourists slept on the floor as they waited for flights off the island. Many hotels closed because of damage but some allowed travelers to camp in their lobbies.

"That was my first experience with the earthquake and it was really terrible," said Lize Reert, a Belgian woman among the several thousand who fled Gili Trawangan. "It was a nightmare in my life."

Like its better known neighbor Bali, Lombok is home to beaches and mountains. Hotels and other buildings in both locations are not allowed to exceed the height of coconut trees.

Indonesia is prone to earthquakes because of its location on the "Ring of Fire," an arc of volcanoes and fault lines in the Pacific Basin. In December 2004, a massive magnitude 9.1 earthquake off Sumatra triggered a tsunami that killed 230,000 people in a dozen countries.