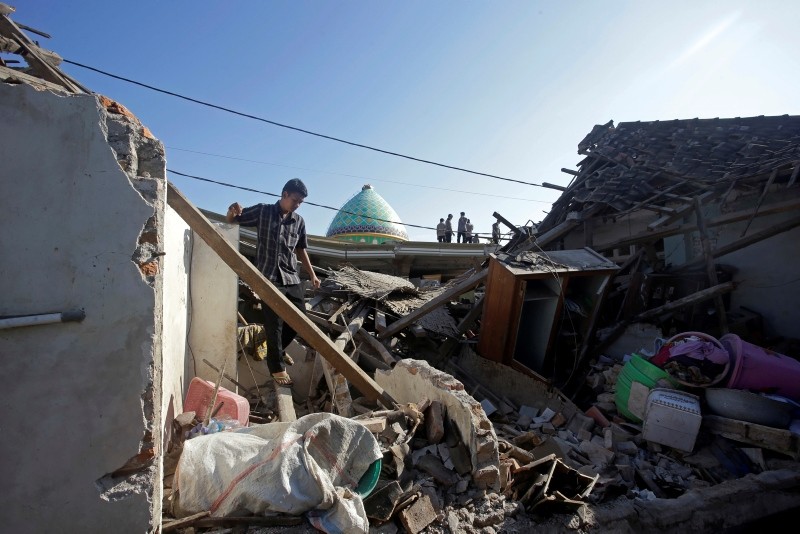 A strong aftershock has shaken the Indonesian island of Lombok where tens of thousands of people are homeless after a powerful earthquake on Sunday.

Indonesia's geological agency said the quake Thursday afternoon had a magnitude of 6.2 and was shallow, at a depth of 12 kilometers, centered in the northwest of the island. It said it didn't have the potential to cause a tsunami.

The U.S. Geological Survey measured the quake at magnitude 5.9.

Meanwhile, the devastating earthquake on Sunday was "exceptionally destructive" and wiped out entire villages in the worst-hit regions, relief agencies warned as the death toll jumped to 347 according to state-run news agency Antara.

Relief efforts have yet to reach parts of the island four days after the quake hit, Indonesian authorities said, as hopes fade of finding further survivors among the wreckage.

"There are still some evacuees that have not yet been touched by aid, especially in North Lombok and West Lombok," national disaster agency spokesman Sutopo Purwo Nugroho tweeted Thursday.

Nearly 1,500 people have been hospitalized with serious injuries and more than 156,000 displaced, Nugroho told AFP.

Local authorities, international relief groups and the central government have begun organizing aid, but shattered roads have slowed efforts to reach survivors in the mountainous north of Lombok, which bore the brunt of the quake.

"We are still waiting for assessments from some of the more remote areas in the north of the island, but it is already clear that Sunday's earthquake was exceptionally destructive," Christopher Rassi, the head of a Red Cross assessment team on Lombok, said in a statement.

"I visited villages yesterday that were completely collapsed."

Tens of thousands of homes, businesses and mosques were levelled by the quake, which struck on Sunday as evening prayers were being said across the Muslim-majority island.

There are fears that two collapsed mosques in north Lombok had been filled with worshippers.

Rescuers have found three bodies and also managed to pull one man alive from the twisted wreckage of one mosque in Lading Lading village, while at least one body has been spotted under the rubble in Pemenang.

Authorities are gathering information from family members with missing relatives to determine how many more people may have been in the buildings when they collapsed, national search and rescue agency spokesman Yusuf Latif told AFP.

Across much of the island, a popular tourist destination, once-bustling villages have been turned into virtual ghost towns.

Many frightened villagers are staying under tents or tarpaulins dotted along roads or in parched rice fields, and makeshift medical facilities have been set up to treat the injured.

Evacuees in some encampments say they are running out of food, while others are suffering psychological trauma after the powerful quake, which struck just one week after another tremor surged through the island and killed 17.

There is a dire need for medical staff and "long-term aid", especially food and medicine in the worst-hit areas, government officials said.

Some evacuees have complained of being ignored or experiencing long delays for supplies to arrive at shelters.

"There has been no help at all here," said 36-year-old Multazam, staying with hundreds of others under tarpaulins on a dry paddy field outside West Pemenang village.

"We have no clean water, so if we want to go to the toilet we use a small river nearby," he said, adding they needed food, bedding and medicine.

The Indonesian Red Cross said it had set up 10 mobile clinics in the north of the island.

A field hospital has also been established near an evacuation center catering to more than 500 people in the village of Tanjung.

Kurniawan Eko Wibowo, a doctor at the field hospital, said most patients had broken bones and head injuries.

"We lack the infrastructure to perform operations because (they) need to be performed in a sterile place," Wibowo told AFP.

Aid groups say children are particularly vulnerable, with many sleeping in open fields and suffering illnesses from lack of warm clothing and blankets.