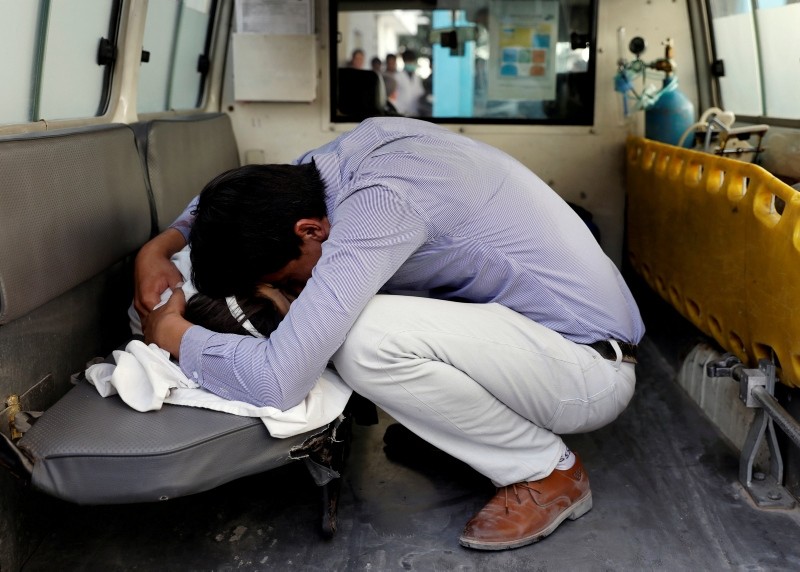 A suicide bomber targeted students preparing for university exams in a Shiite neighborhood of Kabul on Wednesday, killing at least 48 young men and women studying together in an attack that was blamed on the Daesh group.

The Afghan Health Ministry, said at least 67 people were also wounded in the attack that struck a private building in the Shiite Dasht-i Barcha area of Kabul.

The explosion initially set off gunfire from Afghan guards in the area, leading to assumptions that there were more attackers involved, but officials later said all indications were that there was only one bomber.

No one immediately claimed responsibility for the attack but Jawad Ghawari, a member of the city's Shiite clerical council, blamed the Daesh group, which has carried similar attacks in the past, hitting mosques, schools and cultural centers.

The Turkish Foreign Ministry on Wednesday "strongly" condemned the terrorist attack, issuing a statement: "We learned with sorrow that the terrorist attack that targeted an educational institution in Kabul today resulted in the loss of lives and injuries."

The ministry also wished God's mercy upon those who lost their lives, speedy recovery to the wounded, and conveyed condolences to the "friendly" government and the "brotherly" people of Afghanistan.

In the past two years, Ghawari said there were at least 13 attacks on the Shiite community in Kabul alone.

Abdul Hossain Hossainzada, a Shiite community leader in the neighborhood in western Kabul, said the bomber apparently targeted the course, which had young men and women studying together.

Both the resurgent Taliban and the Daesh affiliate in Afghanistan target Shiites. Zabihullah Mujahid, the Taliban spokesman, denied any involvement by the group in the Kabul attack.

The attack took place in northern Baghlan province, in the Baghlan-I Markazi district, said Mohammad Safdar Mohseni, the head of the provincial council. Dilawar Aymaq, a parliamentarian from Baghlan, said the attack targeted a military checkpoint and another manned by the so-called local police, militias recruited and paid by the Interior Ministry.

Abdul Hai Nemati, the governor of Baghlan, said at least nine security forces were still missing and four others were wounded in the attack. He said reinforcements have been dispatched to help recapture the checkpoints.

Mujahid, the Taliban spokesman, claimed responsibility for the assault.

Meanwhile, life was gradually returning to normal in parts of the eastern city of Ghazni after a massive, days-long Taliban attack, though sporadic gunbattles still underway in some neighborhoods.

Afghans emerged from their homes and some shops reopened in Ghazni, where the Taliban launched a coordinated offensive last Friday, overwhelming the city's defenses and capturing several neighborhoods. Afghan forces repelled the initial assault and in recent days have struggled to flush the insurgents out of residential areas where they are holed up.

The United States and NATO have launched airstrikes and sent military advisers to aid Afghan forces as they fight for the city, just 120 kilometers (75 miles) from the Afghan capital with a population of some 270,000 people.

Arif Noori, a spokesman for the provincial governor, said Wednesday that "life is getting back to normal" after at least 35 civilians were killed in recent days. But he said wounded people were still arriving at the city's only hospital, which has been overwhelmed by the casualties.

Hundreds of people have fled the fighting in Ghazni, which has also killed about 100 members of the Afghan security forces.

Elsewhere in Afghanistan, the Taliban attacked a police checkpoint in the southern Zabul province early Wednesday, killing four policemen, according to the provincial police chief, Mustafa Mayar, who said another three officers were wounded. He said seven attackers were killed and five were wounded during the battle, in which the Taliban used artillery and heavy weapons.

The Taliban have seized several districts across the country in recent years and carry out near-daily attacks targeting Afghan security forces. The assault on Ghazni was widely seen as a show of force ahead of possible peace talks with the U.S., which has been at war in Afghanistan for nearly 17 years.

Also on Wednesday, six children were killed when they tinkered with an unexploded rocket shell, causing it to blow up, said Sarhadi Zwak, spokesman for the governor of the eastern Laghman province. Zwak said that the victims were girls, aged 10-12, who were gathering firewood on Wednesday.

He blamed the Taliban, saying the rockets they fire at Afghan security forces often harm civilians.

Afghanistan is littered with unexploded ordnance left by decades of war. It is also plagued by roadside bombs planted by insurgents, which are usually intended for government officials or security forces, but often kill and maim civilians.