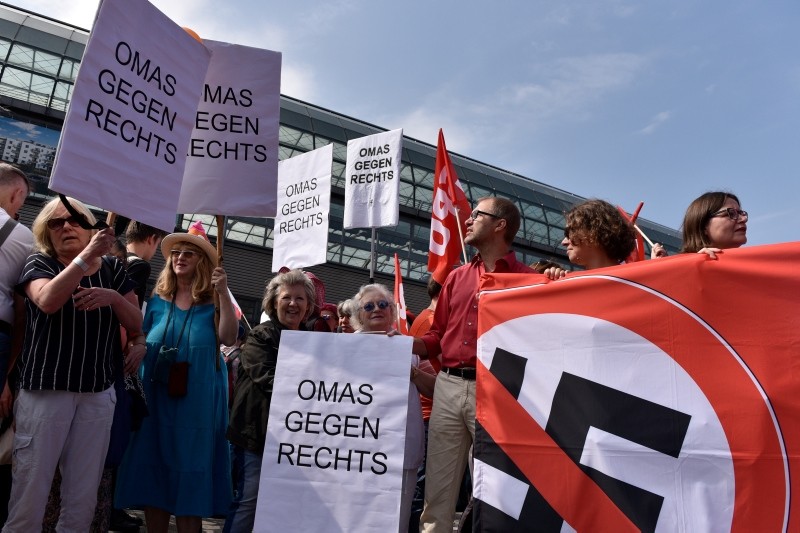 Elder ladies hold displays reading 'Grandmas against the right wing' during a demonstration against a gathering of far-right organizations commemorating the death anniversary Rudolf Hess in the district of Spandau in Berlin, Germany. (EPA Photo)
by Aug 18, 2018 12:00 am

Several hundred people have so far gathered in Berlin's western district of Spandau to protest an annual neo-Nazi rally that commemorates the death of Rudolf Hess, a deputy of Adolf Hitler.

Balloons emblazoned with "No Room for Nazis" floated above protesters, who included a group of older women holding banners that read "Grannies against the Right" and "Spandau remains Nazi-free."

"I don't want my grandchild to be born in a second World War II scenario," a protester who asked to be called Mrs. Graf told dpa. "I want him to live in a multi-cultural society where there is no hatred for any community."

Representatives from Germany's Social Democratic Party (SPD) and the Greens, as well as the IG Metall union, carried flags and banners, and a group of protesters beat drums to rouse passers-by.

The neo-Nazi event was later cancelled by the event's organizers, local police said.

However, the organizers announced that they would be heading to Berlin's eastern district of Friedrichshain, an area known for its nightlife and alternative scene, for a second, quickly arranged demonstration.

Between the two events, a total of 500 people had confirmed their attendance, but only about 50 were present at the first march's starting point in Berlin's Spandau district.

Police were also set to shift the focus of their operations to Friedrichshain, with a total of about 2,300 police officers deployed across the city, a police spokeswoman said.