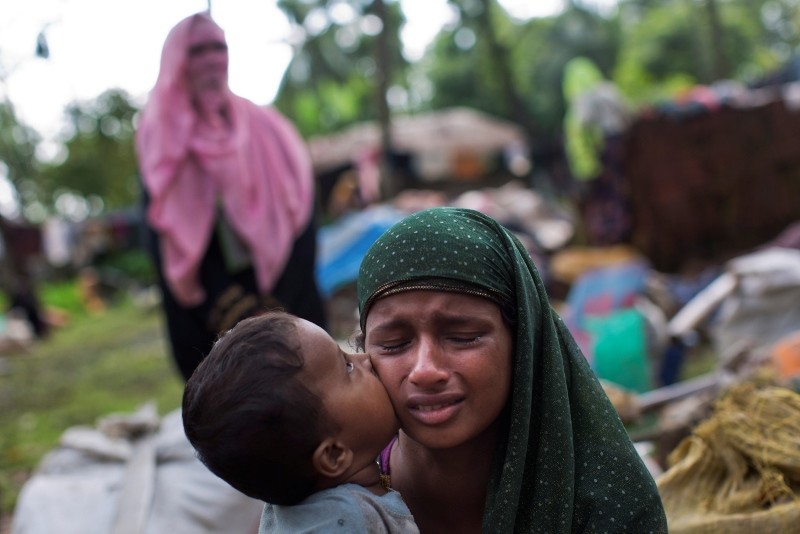 A Rohingya Muslim child places a kiss on his mother's cheek as they rest after having crossed over from Myanmar to the Bangladesh side of the border near Cox's Bazar's Teknaf area. (AP Photo)
by Anadolu Agency Aug 19, 2018 12:00 am

A new report brings the estimated number of murdered Rohingya up to 23,962 from its previously recorded number of 9,400 provided by Doctors without Borders, revealing deadly violence

More than 24,000 Rohingya Muslims have been killed by Myanmar's state forces since August 2017, according to a new report.

The figures were revealed in the report – Forced Migration of Rohingya: The Untold Experience – released by the Ontario International Development Agency, which involved researchers and organizations from Australia, Bangladesh, Canada, Norway and the Philippines.

Rohingya refugees who fled to Bangladesh from Myanmar said more than 40,000 Rohingya had suffered bullet wounds, the report said.

The research brought the estimated number of murdered Rohingya up to 23,962 (± 881) from its previously provided number of 9,400 by the Doctors Without Borders.

More than 34,000 people were thrown into fire and more than 114,000 others were beaten, according to the research.

It also says 17,718 (±780) Rohingya women and girls were raped since Myanmar army and police systematically targeted the world's most persecuted group.

The research showed that more than 115,000 Rohingya houses were burnt down and 113,000 others were vandalized.

A previous report by the Doctors Without Borders had said at least 9,400 Rohingya were killed in Rakhine from Aug. 25 to Sept. 24 last year.

The humanitarian group said the number included 730 children below the age of 5.

The U.N. has branded operations by Myanmar security forces as ethnic cleansing. Rohingya have recounted widespread rape, murder and torture while being driven out of their villages, hundreds of which were razed to the ground. Myanmar denies almost all accusations of atrocities and says it was defending itself against Rohingya militants who launched deadly attacks on police posts.

The new study gave examples of brutality by the Myanmar army and the inhumane treatment of the Rohingya minority.

One of the most disturbing accounts reported by the study group is of a 21-year-old Rohingya woman, Hasina Begum who was "lucky enough to survive and fled to Bangladesh".

In her village Tolatuli (Moungdaw), Begum heard gunshots and saw the military burning down her village and killing people. She and her family, together with others, took refuge at a riverbank but the army personnel surrounded them and started firing, killing 50-60 of them in the first fire.

Some of them jumped into the river but only a few survived.

The army killed all men in the next four to five hours and burned their bodies in holes dug in the ground. The army members then took Begum's four-month-old baby and threw it into the burning fire.

The soldiers raped young women, including Begum, before setting fire on the building they were in before leaving.

Begum and her sister-in-law later managed to reach the Bangladesh-Myanmar border in the following few days.

More than 40 percent of the displaced Rohingya are under age 12, according to the UN and many others are elderly people requiring additional aid and protection.

The settlements in Kutupalong and Nayapara in Bangladesh's Cox's Bazar district host nearly all who arrived from Myanmar.

The Rohingya, described by the UN as the world's most persecuted people, have faced heightened fears of attack since dozens were killed in communal violence in 2012. In a report, U.N. investigators said such violations might have constituted crimes against humanity.