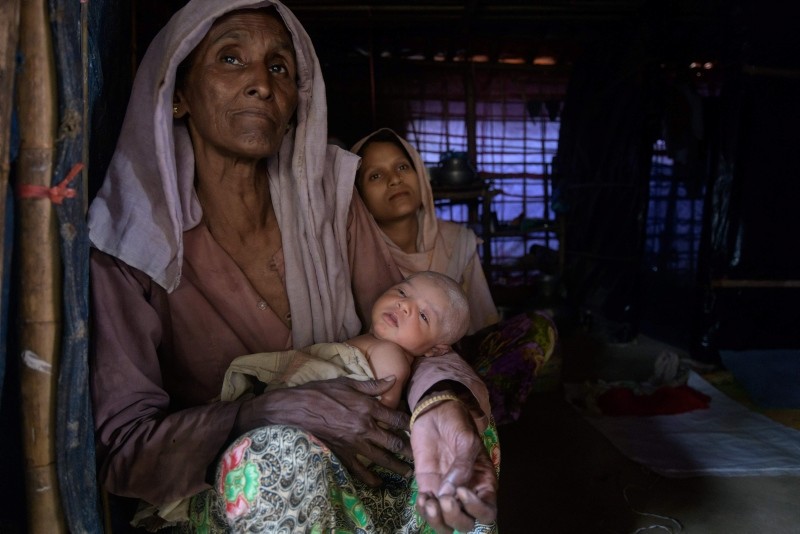 The world's largest refugee camp, in Bangladesh, has swollen over the last year to accommodate more than a million Rohingya Muslims, many of whom fled arson, killings, rape and torture by the Myanmar army in their native Rakhine State.

Although Bangladesh insists the Rohingya will return to Myanmar, the government of one-time democracy icon Aung San Suu Kyi has done little to encourage their return or bring those accused of grievous human rights abuses to account.

The few hundred thousand Rohinyga left in Rakhine continue to be denied citizenship and access to basic human rights. They are labelled "Bengali" to infer they are interlopers from Bangladesh and live under "apartheid" conditions, according to Amnesty International.

The Rohingya crisis has caused a dramatic fall from grace for Myanmar's de facto leader Suu Kyi, who for a year has described reports of atrocities as "fake news," locking up journalists who investigated massacres, and denying access to U.N. experts.

Myanmar has made a big show of welcoming back Rohingya, highlighting repatriation centers and creating a plethora of commissions and working groups, but there have been few returns to Rakhine State.

She made the comments in a lecture in Singapore in which she reviewed her two years in power. The speech was part of a series of annual lectures by global leaders organized by the Institute of Southeast Asia Studies.

"We who are living through the transition in Myanmar view it differently than those who observe it from the outside and who will remain untouched by its outcome," she said, in an apparent response to criticism of how her government has handled the plight of the Rohingya.

Suu Kyi's government says it carried out justifiable counterinsurgency operations in response to attacks by militants on security forces.

In a measure of the national sensitivity of the subject, Suu Kyi appeared not to refer to the Rohingya by name in her speech. The term is rejected by many Buddhists in Myanmar who do not consider the group a native minority and charge it entered illegally from Bangladesh, although many families have lived for generations in Myanmar. The Rohingya face both social and official discrimination, and are generally denied citizenship.

Suu Kyi, who holds the positions of state counsellor and foreign minister, said terrorism was the cause of the crisis in Rakhine and remains a threat.

"The danger of terrorist activities which was the initial cause of events leading to the humanitarian crisis in Rakhine remains real and present today," she said. "Unless this security challenge is addressed, the risk of intercommunal violence will remain. It is a threat that could have grave consequences, not just for Myanmar but also for other countries in our region and beyond."

Suu Kyi said "we hope to work with Bangladesh to affect the voluntary, safe and dignified return of displaced people from Northern Rakhine."

Suu Kyi gave no timeframe for the returns, saying that Bangladesh would have to set the pace: "The returnees have to be sent back by Bangladesh. We can only welcome them at the border."

There has also been little effort to address widespread stigmas or bring perpetrators to account.

The army's crackdown followed attacks last August on security outposts by the secretive Arakan Rohingya Salvation Army, which said it was acting on behalf of oppressed Rohingya.

Suu Kyi said it was difficult to say when the Rohingya who fled will be able to return to Rakhine state because her nation needs the cooperation of Bangladesh.

She said Myanmar has mapped out general sites for the resettlement of returning Rohingya, but the timing of the repatriation also depends on Bangladesh.

"Rohingya will go back, but only when they believe they will be safe and their fundamental rights, including freedom of movement, the ability to pursue a livelihood, and path to citizenship are respected," said Alistair Boulton, an assistant regional representative of the U.N. High Commission for Refugees (UNHCR) in Bangkok.

Earlier this month, UNHCR and the U.N. Development Programme urged Myanmar make more progress in line with a memorandum of understanding signed in June designed to create the conditions needed for Rohingya to return.

The two agencies complained that U.N. access had been denied and urged Myanmar to make good on promises of freedom of movement and a pathway to citizenship for Rohingya.

Requests for authorizations for staff to visit the conflict area have been beset by delays and authorities have offered access to a limited area, Knut Ostby, the U.N. resident and humanitarian coordinator in Myanmar, told Reuters.

Ostby said the United Nations had declined to accept an offer from the government to work in a limited number of villages and would not send in experts until it had negotiated a better deal.

"They're standing ready to go when we have effective access," he said.

"We need to have the possibility to do a proper job."

Suu Kyi said on Tuesday that her government had "granted access" to the United Nations to work in 23 villages across northern Rakhine State as part of a "pilot assessment programme".

The United Nations wants to implement "quick impact projects" to benefit the population still there, including cash-for-work schemes and small-scale infrastructure projects.

Ostby said he did not know how the 23 villages, spread out across Maungdaw and Buthidaung townships, had been selected.

The United Nations wanted to work in villages next to one another, he said, to avoid the risk of creating "inequality among neighboring villages".

Government spokesman Zaw Htay said the United Nations could work within the selected areas first and then expand its operations.

"As far as I understand, UNDP is to implement pilot project within the allowed villages and extend afterwards," Zaw Htay said. "If UNDP does not think it's enough, they would have to discuss with the government."

The United Nations as been mostly barred from northern Rakhine State since August last year, when the government accused U.N. agencies of supplying food to Rohingya militants.

Stigmatized discrimination against Rohingya was a "significant challenge," with cultural, social and legal elements, said Boulton, but change could be brought about quickly with the right attitude.

Suu Kyi is forced to balance international pressure and domestic sentiment, which is largely unsympathetic to their plight, viewing them as unwelcome guests in Myanmar despite the ethnic group until recently being recognized as citizens.

"Myanmar public have other things to worry about, like the economy, the falling kyat price, the floods and the peace process," said Soe Myint Aung, founder of the Yangon Center for Independent Research.

The launch of an investigation into human rights abuses in Rakhine State was denounced by some international observers as a hollow move to buy Myanmar time and goodwill diplomatically.

But at home, military politicians and Buddhist nationalists accused the government of failing the ethnic Rakhine Buddhist population and said international scrutiny infringed on sovereignty.

Veteran U.S. diplomat Bill Richardson, a longtime Suu Kyi confidante who dramatically quit a previous Rakhine commission earlier this year, told dpa the investigation will be "totally ineffective" and another "white wash by the government."

"The military will give zero cooperation and the government of Myanmar will be unable and unwilling to pressure them to give the relevant information that will be needed for a just inquiry," he said.

Despite allowing largely democratic elections in 2015 after decades of military rule, Myanmar's powerful generals are free from civilian oversight, control three key securities ministries and are afforded 25 percent of parliament seats according to the 2008 constitution.

Rohingya languishing in Bangladesh camps are tired of commissions, according to Rohingya activist Sam Naeem, and they only want the government to reinstate basic rights that were forcefully taken away.

"The Rohingya issue is not as complicated as the government always claims. It needs no magic solution, it just needs the government's sincere and genuine intention to resolve it," he told dpa.
Last Update: Aug 21, 2018 5:22 pm
RELATED TOPICS