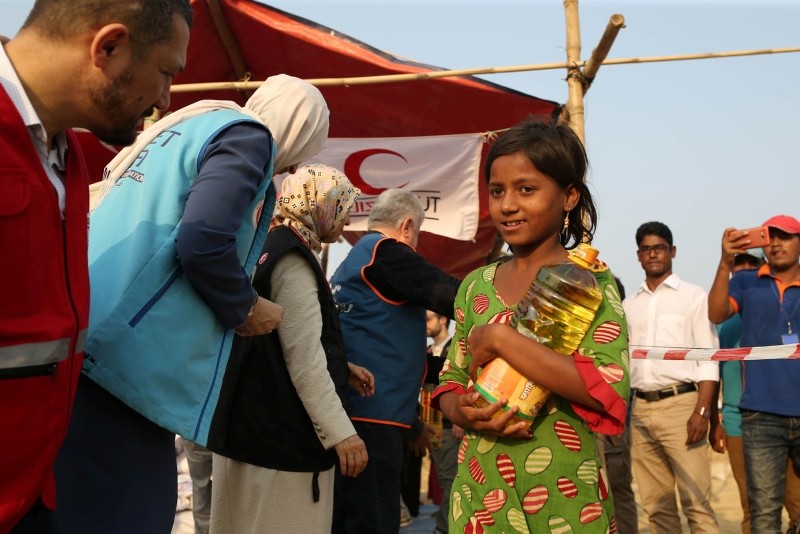 Turkish institutions remain at the forefront of providing aid to Rohingya refugees, who fled Myanmar to Cox's Bazaar in southeastern Bangladesh after a brutal military crackdown on Aug. 25 last year.

Çetinkaya said around one million Rohingya live in Bangladesh with 706,000 seeking refuge in Cox's Bazaar alone since the August 2017 violence. Some 300,000 locals also asked for aid following the Rohingya migrations, he added.

Çetinkaya said distribution of hot meals "forms the backbone of our aid activities."

The meals include meat, chicken and rice, he said, adding that around 25,000 to 30,000 people benefit from the daily meals.

"We are also employing 120 people. Half of them are Bangladeshis and the other half are Rohingya," he said.

The World Food Program also distributes food to refugees in the area, giving them rice, oil and lentils; however, eating rice everyday falls short of providing full nutrition, especially to children, he added.

TIKA's daily meals, on the other hand, are known to be healthier since it includes meat and chicken, fulfilling the protein needs of the refugees.

He said TIKA was also building a 100-meter long steel bridge in the area that would help in the distribution of aid in the camp.

Also, AFAD built 1,065 bamboo houses, 100 toilets, 100 bath units and six wells for the refugees. It also built a field hospital in coordination with the Turkish Health Ministry, which started operating on Jan. 25. As of Aug. 20, a total of 90,153 treatments were carried out at the hospital; 2,025 patients stayed while 522 medical operations were conducted.

Çetinkaya said TIKA has started a project to build 100 semi-permanent schools with UNICEF using concrete and bamboo; so far, 30 have been completed.

Since Aug. 25, 2017, more than 24,000 Rohingya Muslims have been killed by Myanmar's state forces, according to the Ontario International Development Agency (OIDA).

In its recent report titled Forced Migration of Rohingya: The Untold Experience, OIDA increased the estimated number of murdered Rohingya up to 23,962 (± 881) from the Doctors Without Borders figure of 9,400.

The U.N. documented mass gang rapes, killings -- including of infants and young children -- brutal beatings, and disappearances committed by Myanmar state forces. In its report, U.N. investigators said such violations may have constituted crimes against humanity.