Myanmar generals should be prosecuted for 'genocidal intent' against Rohingya, UN investigators say 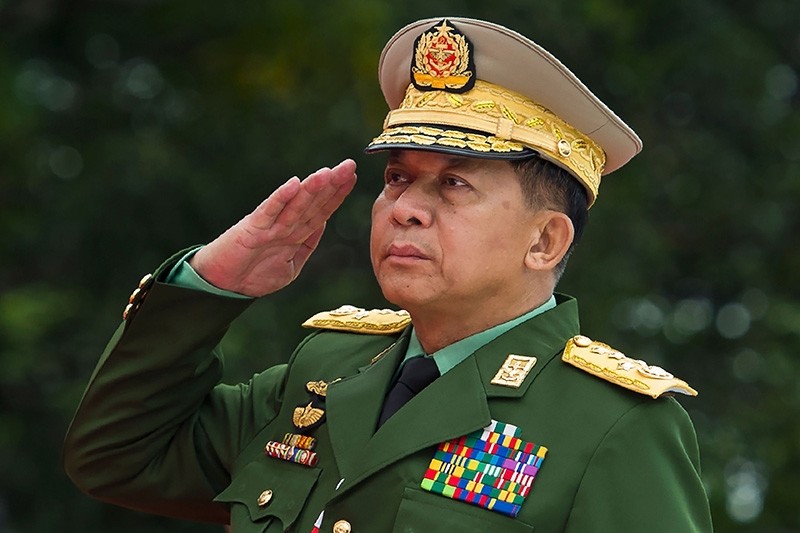 Myanmar's military carried out mass killings and gang rapes of Muslim Rohingya with "genocidal intent" and the commander-in-chief and five generals should be prosecuted for orchestrating the gravest crimes under law, U.N. investigators said Monday.

The civilian government led by Aung San Suu Kyi has allowed hate speech to thrive, destroyed documents and failed to protect minorities from crimes against humanity and war crimes by the army in Rakhine, Kachin and Shan states, they said in a report.

In doing so, it "contributed to the commission of atrocity crimes," the report said.

"The only way forward is to call for his resignation and stepping down immediately," Marzuki Darusman, chairman of the Independent International Fact-Finding Mission on Myanmar, told a Geneva news conference.

He said that the panel, which named Min Aung Hlaing and five other generals in a report, said that its separate confidential list of suspected perpetrators included military officials, auxiliary forces, civilians and insurgents.

A year ago, government troops led a brutal crackdown in Myanmar's Rakhine state in response to attacks by the Arakan Rohingya Salvation Army (ARSA) on 30 Myanmar police posts and a military base. At least 9,000 Rohingya were killed in Rakhine state from Aug. 25 to Sept. 24, according to Doctors without Borders. In a report last December, the global humanitarian group said the deaths of 71.7 percent, or 6,700 Rohingya, were caused by violence. The death toll includes 730 children below the age of 5.

Some 700,000 Rohingya fled the crackdown and most are now living in refugee camps in neighboring Bangladesh.

The U.N. report said the military action, which included the scorching of villages, was "grossly disproportionate to actual security threats."

The three-member "fact-finding mission" and their team, working under a mandate from the U.N.-backed Human Rights Council, meticulously assembled hundreds of accounts from expatriate Rohingyas, as well as satellite footage and other information to assemble the report.

"The military's contempt for human life, dignity and freedom – for international law in general – should be a cause of concern for the entire population of Myanmar, and to the international community as a whole," said fact-finding mission chair Marzuki Darusman, a former Indonesian attorney-general, at a news conference.

The United Nations defines genocide as acts meant to destroy a national, ethnic, racial or religious group in whole or in part. Such a designation is rare under international law, but has been used in countries including Bosnia and Sudan and in the Daesh campaign against the Yazidi communities in Iraq and Syria.

"The crimes in Rakhine State, and the manner in which they were perpetrated, are similar in nature, gravity and scope to those that have allowed genocidal intent to be established in other contexts," said the U.N. Independent International Fact-Finding Mission on Myanmar.

In the final 20-page report, it said: "There is sufficient information to warrant the investigation and prosecution of senior officials in the Tatmadaw (army) chain of command, so that a competent court can determine their liability for genocide in relation to the situation in Rakhine state."

The Myanmar government, which was sent an advance copy of the U.N. report in line with standard practice, has not commented.

They included Brigadier-General Aung Aung, commander of the 33rd Light Infantry Division, which oversaw operations in the coastal village of Inn Din where 10 Rohingya captive boys and men were killed.

Reuters was unable to contact Min Aung Hlaing or Aung Aung on Monday.

The massacre was uncovered by two Reuters journalists - Wa Lone, 32, and Kyaw Soe Oo, 28 - who were arrested as a result last December and are being tried on charges of violating the country's Official Secrets Act. The court had been due to deliver its verdict on Monday, but at a brief hearing earlier the proceedings were postponed until Sept. 3.

In April, seven soldiers were sentenced to 10 years in prison with hard labor for participating in the massacre.

The report said Suu Kyi, a Nobel Peace Prize laureate, "has not used her de facto position as Head of Government, nor her moral authority, to stem or prevent the unfolding events, or seek alternative avenues to meet a responsibility to protect the civilian population."

Suu Kyi's spokesman, Zaw Htay, could not immediately be reached for comment on Monday.

The top U.N. human rights official Zeid Ra'ad al-Hussein has called the crackdown against the Rohingya a "textbook example of ethnic cleansing."

Suu Kyi's government has rejected most allegations of atrocities made against the security forces by refugees. It has built transit centers to receive Rohingya returnees to western Rakhine state, but U.N. aid agencies say that it is not yet safe for them to return.

The U.N. Security Council should ensure all perpetrators are held to account, preferably by referring Myanmar to the International Criminal Court (ICC) or by creating an ad hoc tribunal, the investigators said.

The Security Council should "adopt targeted individual sanctions, including travel bans and asset freezes, against those who appear most responsible for serious crimes under international law" and impose an arms embargo on Myanmar, they said.

The four other generals the U.N. panel said should be prosecuted were named as the army deputy commander-in-chief, Vice Senior-General Soe Win; the commander of the Bureau of Special Operations-3, Lieutenant-General Aung Kyaw Zaw; the commander of Western Regional Military Command, Major-General Maung Maung Soe; and the commander of 99th Light Infantry Division, Brigadier-General Than Oo.

Reuters was not able to contact those four generals on Monday.

The panel, set up last year, interviewed 875 victims and witnesses in Bangladesh and other countries, and analyzed documents, videos, photographs and satellite images.

Decades of state-sponsored stigmatization against Rohingya had resulted in "institutionalized oppression from birth to death," the report said.

"The Tatmadaw acts with complete impunity and has never been held accountable. Its standard response is to deny, dismiss and obstruct," the U.N. report said.

The report also criticized Facebook's response to allegations, including by members of the same U.N. panel in March, that the social media giant had been used to incite violence and hatred against the Rohingyas.

"Although improved in recent months, Facebook's response has been slow and ineffective. The extent to which Facebook posts and messages have led to real-world discrimination and violence must be independently and thoroughly examined," it said.

"Specifically, we are banning 20 Burmese individuals and organizations from Facebook — including Senior General Min Aung Hlaing, commander-in-chief of the armed forces, and the military's Myawady television network," Facebook said.

The world's largest social media networking site said it had removed 46 Pages and 12 accounts for engaging in coordinated "inauthentic" behavior on Facebook.

Facebook said in a statement issued 10 days ago following a Reuters investigative report into its failure to combat hate speech against the Rohingya and other Muslims that it had been "too slow" to address the problem in Myanmar and was acting to remedy the situation by hiring more Burmese speakers and investing in technology to identify problematic content.

The European Union's executive in Brussels will hold a meeting this week with the authors of the U.N. report on Myanmar.

"Those responsible for alleged serious and systemic human rights violation must be held to account," said a spokeswoman for the European Commission. "Any further EU step is something that would have to be discussed with the member states."

The spokeswoman said the U.N. report was timely as the situation in Myanmar was still "extremely serious." The EU has sanctions on Myanmar but has shied away from targeting the commander-in-chief so far.

International courts have a mixed record on prosecutions for genocide.

In 2008, a U.N. court sentenced former army colonel Theoneste Bagosora, accused of masterminding the slaughter of 800,000 people in Rwanda in 1994, to life in prison on charges of genocide and crimes against humanity. His sentence was later cut to 35 years on appeal.

In 2016, former Bosnian Serb leader Radovan Karadzic was convicted by U.N. judges of genocide for the 1995 Srebrenica massacre. He is appealing against the conviction.

The ICC issued arrest warrants for Sudan President Omar al-Bashir in 2009 and 2010 over his alleged role in war crimes including genocide in Sudan's breakaway Darfur province in 2003. He remains in office.