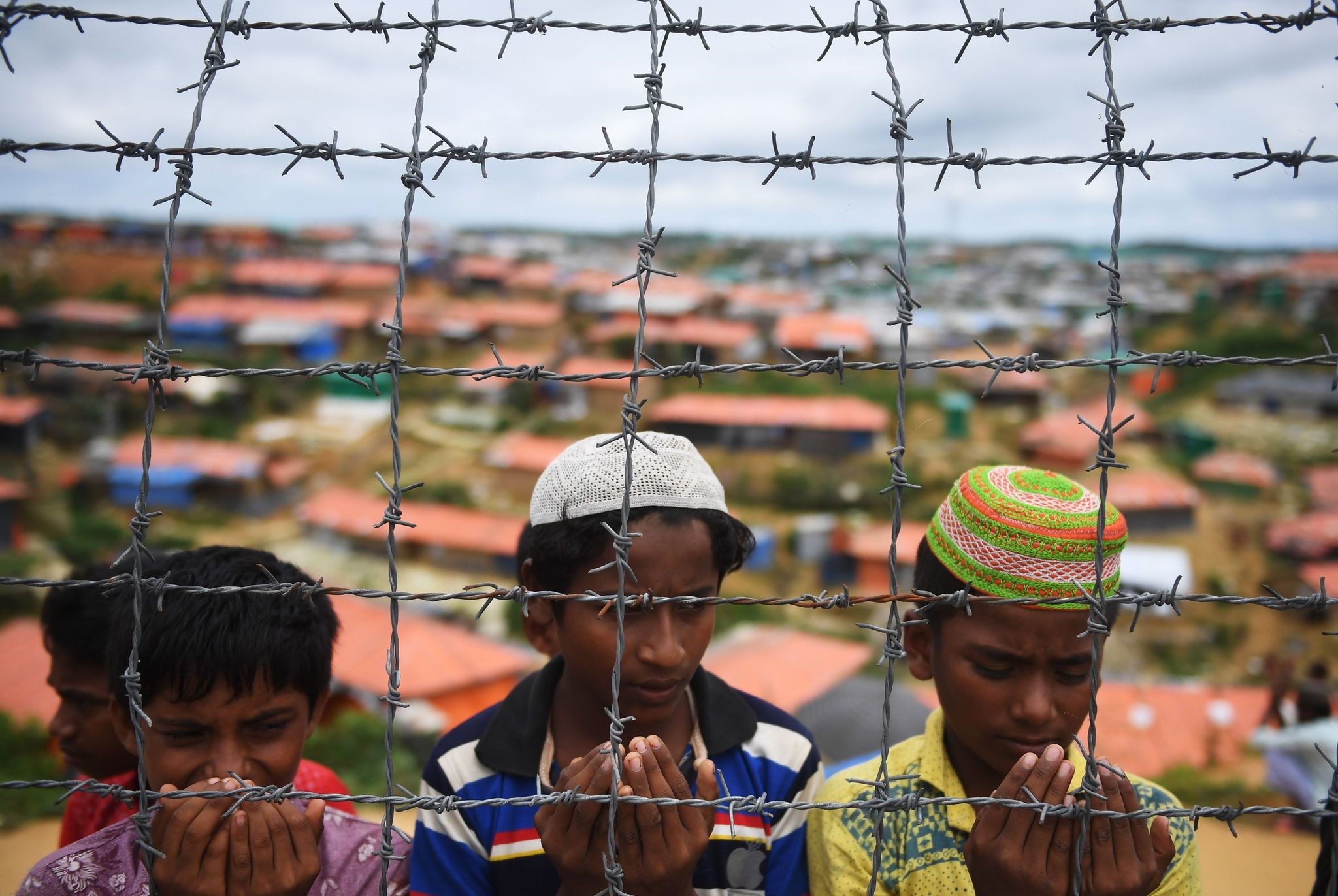 Rohingya refugees perform prayers on the first anniversary of Myanmar military crackdown at the Kutupalong refugee camp, Ukhia, Aug. 25.
by Compiled from Wire Services Aug 27, 2018 12:00 am

A year after fleeing a crackdown in Myanmar, Rohingya Muslims still demand justice for the massacre of their dead relatives and neighbors

Thousands of Rohingya Muslim refugees on Saturday marked the one-year anniversary of the attacks that sent them fleeing to safety in Bangladesh, praying they can return to their homes in Myanmar and demanding justice for their dead relatives and neighbors. More than 15,000 gathered in the morning on a hilltop in the Kutupalong refugee camp, part of a sprawling web of settlements that are now home to nearly 900,000 Rohingya who have fled Myanmar to escape violence.

The camps exploded in size last year after Myanmar's army launched a wave of anti-Rohingya attacks on Aug. 25, with some 700,000 Rohingya eventually pouring across the border. Thousands were killed in the violence. One banner read "25th August – Black Day."

The protesters – men, women and children – marched through the muddy camp, chanting slogans such as "No more genocide, we want justice." At a mass prayer rally, one speaker repeatedly shouted, "Who are we?" to which the crowd responded in chorus: "Rohingya! Rohingya!"

Most people cried as they raised their hands while an imam who led the prayer sought God's blessings, saying, "Please consider the people who have been killed as martyrs and place them in heaven."

Some of the protesters carried paper Myanmar flags. Newly set up shops inside the camp were closed during the protest, which lasted several hours.

Also on Saturday, some 100 protesters from a group of nongovernmental organizations formed a human chain in front of the national press club in Dhaka, Bangladesh's capital, to demand the international community put pressure on Myanmar's government to try those responsible for murder, rape and arson, the English-language Daily Star reported.

"We are Rohingya, we are Muslims, we have been driven away from our land, from our homes," an unidentified speaker told the crowd on Saturday. "We want justice. We want to go back to our homes."

The U.N. has branded the operations by Myanmar security forces as ethnic cleansing. Rohingya have recounted widespread rape, murder and torture while being driven out of their villages, hundreds of which were razed to the ground. Myanmar denies almost all accusations of atrocities and says it was defending itself against Rohingya militants who launched deadly attacks on police posts.

Since the Myanmar violence last year, more than 24,000 Rohingya Muslims have been killed by Myanmar's state forces, according to a new report. The figures were revealed in the report, Forced Migration of Rohingya: The Untold Experience, released by the Ontario International Development Agency, which involved researchers and organizations from Australia, Bangladesh, Canada, Norway and the Philippines.

Last year, at least 9,000 Rohingya were killed in Rakhine state from Aug. 25 to Sept. 24, according to Doctors without Borders. In a report last December, the global humanitarian group said the deaths of 71.7 percent, or 6,700 Rohingya, were caused by violence. The death toll includes 730 children below the age of 5.

The Rohingya, described by the U.N. as the world's most persecuted people, have faced heightened fears of attack since dozens were killed in communal violence in 2012. In a report, U.N. investigators said such violations may have constituted crimes against humanity.