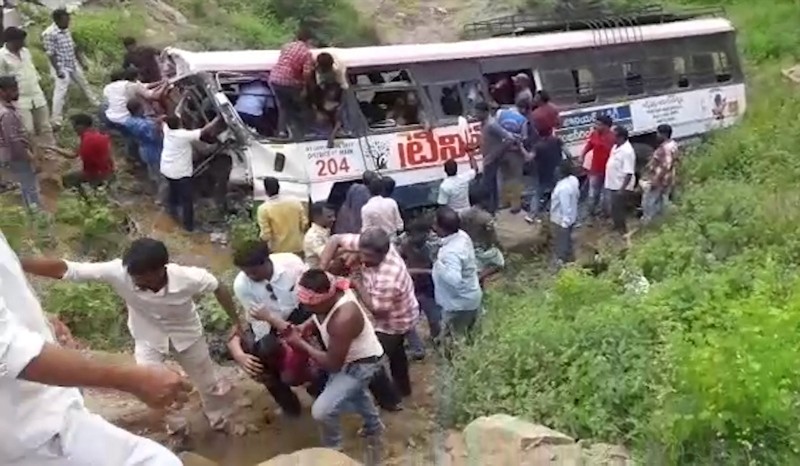 Screen grab made from video shows rescuers pull out passengers from a bus that fell into a gorge in Jagtiyal district of Telangana, India, Tuesday, Sept. 11, 2018. (AP Photo)
by reuters
Sep 11, 2018 12:00 am
An overcrowded bus plunged into a gorge in southern India on Tuesday, killing at least 55 people and injuring several more, in one of the worst such accidents this year, authorities said.

The bus, part of the state-run network in Telangana, was returning from a hilltop temple in the district of Jagtial, about 190 kms (118 miles) from Hyderabad, the state capital, a district official said.

"The driver lost control and the bus skidded off the road and fell into the valley," a top district official, G. Narendhar, told Reuters. "The majority of the passengers have suffered severe injuries."

Media cited brake failure as the possible reason for the tragedy, but Narendhar said that needed to be investigated, adding that the 94 people on board the bus, including its driver and conductor, had exceeded the legal limit of 52.

"The bus accident ... is shocking beyond words," Prime Minister Narendra Modi said on social network Twitter. "Anguished by the loss of lives."