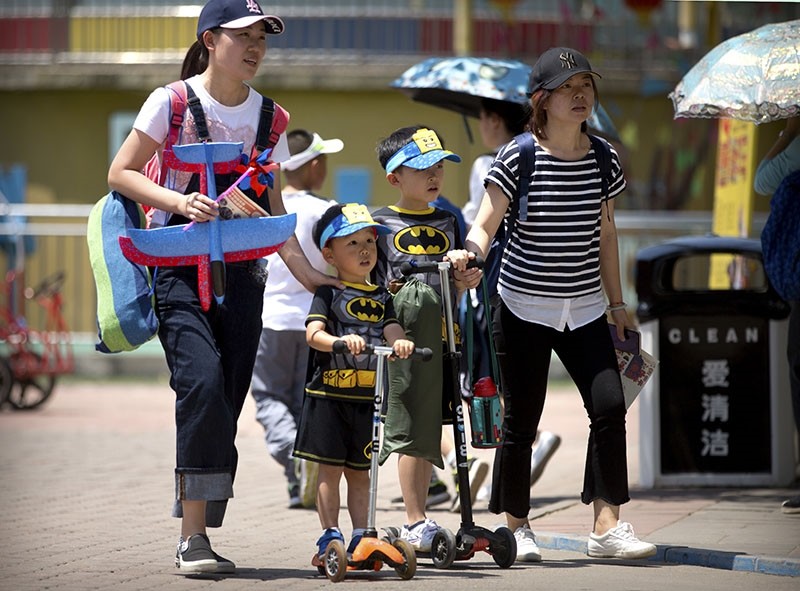 In this June 1, 2018, photo, women walk with children wearing matching outfits at a public park on International Children's Day in Beijing. (AP Photo)
by Daily Sabah with Reuters Sep 11, 2018 12:00 am

China's health commission is eliminating agencies responsible for enforcing birth limit policies and family planning, a sign showing that China may be ready to allow couples to have more children.

In recent weeks, state-media has hinted that the restricting policy may be scrapped to combat an aging population in China.

According to an announcement by China's National Health Commission (CNHC), three offices have been closed so far and removed from the new structure with plans to open new offices.

CNHC stated that new offices will be opened to improve "birth policy and to organize implementation, and to establish and improve the system of extraordinary family assistance for family planning."

Last month, China Post revealed a new stamp showing a family of two pigs with three piglets, hinting that the new policy may be just around the corner.

China has loosened its family planning policy as its population grays, birth rates slow and its workforce declines. In 2016, the government allowed couples in urban areas to have two children, replacing a controversial one-child policy enforced since 1979.

While China's population growth fell well below the world average under the one-child policy, Chinese policymakers have become wary of falling birth rates and a rapidly growing aging population.

Bloomberg reported in May that China was planning to scrap all limits on the number of children a family can have by the end of 2018.