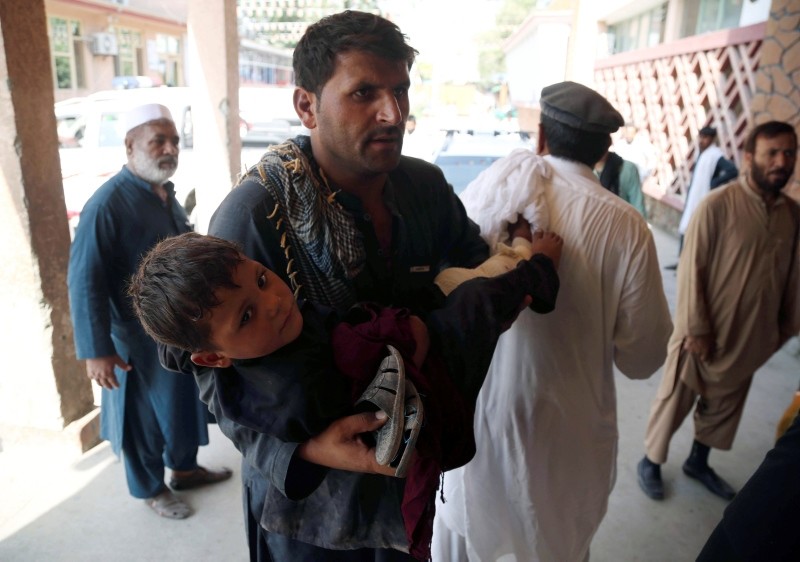 A young boy who was injured in suicide bomb blasts which targeted girl's schools, is rushed to a hospital to receive medical attention in Jalalabad, Afghanistan, 11 September 2018. (EPA Photo)
by Associated Press Sep 11, 2018 12:00 am

A suicide bomber detonated his explosives-filled vest among a group of people protesting a local police commander in eastern Afghanistan on Tuesday, killing 32 and wounding about 130, a provincial official said.

Attahullah Khogyani, spokesman for the provincial governor said the all 32 people killed in the attack were innocent civilians gathered for a protest. A number of wounded people are in critical condition, he said.

"Around four hundred people gathered for the protest and the bomber detonated his vest full of explosive among the crowd," said Capt. Qais Saifi, an official at Nangarhar province police headquarters.

Gen. Ghulam Sanayee Stanikzai, police chief of Nangarhar province, said people from Achin district had come to the Momandara district to block the main highway between the capital Jalalabad and the Torkham border with Pakistan.

Stanikzai said locals had gathered to complain about a local police commander and the suicide bomber targeted them. It was unclear whether the attacker knew the nature of the protest.

Also in Nangarhar, at least one person was killed and four others wounded in a series of additional bomb blasts near different schools, said Khogyani.

Khogyani said the first bomb detonated near a school in the provincial capital Jalalabad. That blast was later followed by two others in Behsud district, also near two schools.

A 14-year-old student was killed and four others wounded in the first attack, he said.

Afghan president Ashraf Ghani strongly condemned the suicide attack against the demonstrators as well as the bomb blasts near schools in Nangarhar. A statement released Tuesday from Ghani's office quoted him as saying that "attacks on civilian facilities, mosques, women, children, are all crimes against humanity."

Taliban insurgents in a statement posted on their website denied any involvement in the attack.

No any other group immediately claimed responsibility for any of the attacks, but both Taliban insurgents and the Daesh militants are active in eastern Afghanistan, especially in Nangarhar province.