Australia's Queensland on the hunt for strawberry saboteurs using needles 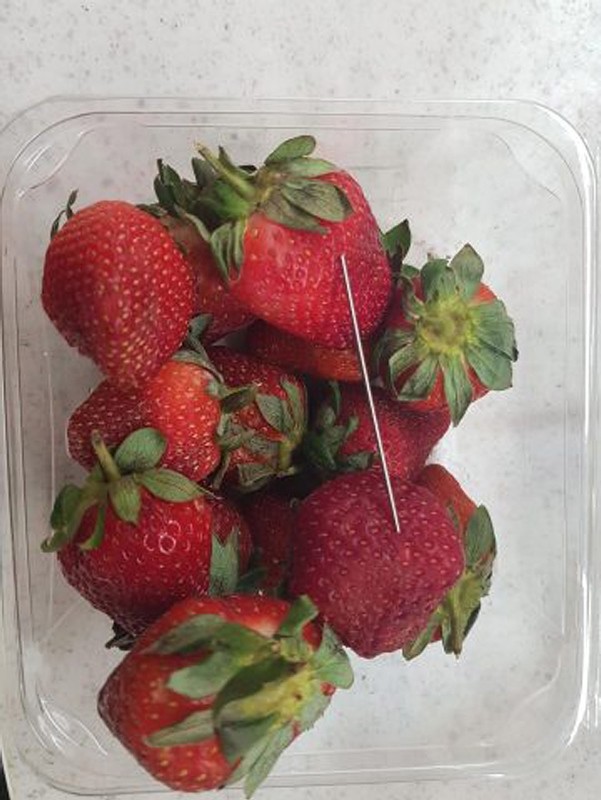 An undated handout photo made available by the Queensland Police on 14 September 2018 shows a thin piece of metal seen among a basket of strawberries in Gladstone, Queensland, Australia. (EPA Photo)
by reuters
Sep 15, 2018 12:00 am

The Australian state of Queensland on Saturday offered a A$100,000 ($71,500) reward for information leading to the arrest of those responsible for sabotaging strawberries with sewing needles.

The police have said that six brands of strawberries in Australia are believed to be contaminated with needles and pins, prompting warnings from authorities to slice the fruit before eating.

"Someone is trying to sabotage the industry but also in doing that, they are putting babies' and children's and families' lives at risk," Queensland Premier Annastacia Palaszczuk said at a press conference, where she confirmed the reward.

The Berry Obsession, Berry Licious, Donnybrook Berries, Love Berry, Delightful Strawberries and Oasis brands of strawberries are believed to be affected, according to the police, who said the contaminated fruit appeared to have originated at a Queensland-based supplier.

Queensland is a major strawberry producer in a national industry worth more than A$130 million a year.

Woolworths Group has removed all the affected brands from shelves in its supermarkets, but continues to sell other varieties of the fruit.

Strawberry prices have dropped around the country. ABC News reported on Saturday that wholesale prices have halved to A$0.50 per punnet below the cost of production in Western Australia, where strawberries crops are now peaking, with growers forced to dump tonnes of the fruit.