Japan's Abe re-elected as ruling party leader, to stay on as PM 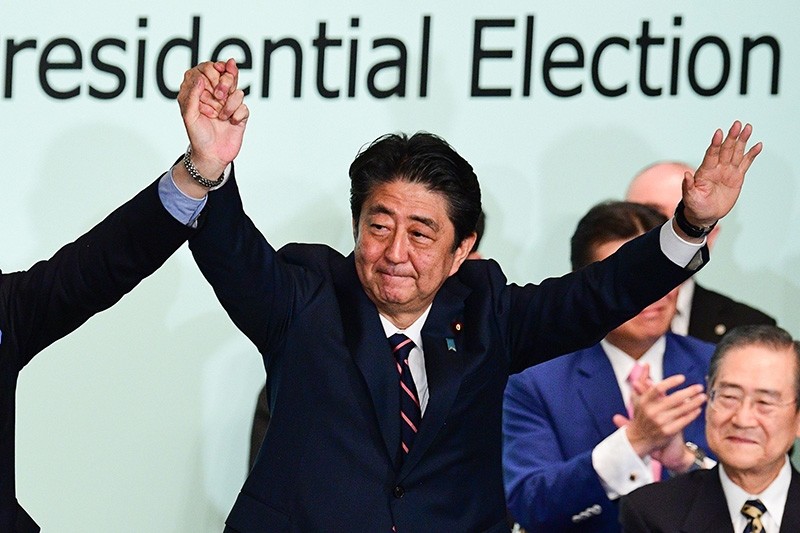 Japanese Prime Minister Shinzo Abe was re-elected as head of his ruling Liberal Democratic Party in a landslide Thursday, paving the way for up to three more years as the nation's leader and a push toward a constitutional revision.

The decisive victory may embolden Abe to pursue his long-sought amendment to Japan's U.S.-drafted pacifist constitution, although the hurdles remain high and doing so would carry political risks.

"It's time to tackle a constitutional revision," Abe said in a victory speech.

Abe said he's determined to use his last term to pursue his policy goals to "sum up" Japan's postwar diplomacy to ensure peace in the country.

"Let's work together to make a new Japan," he said.

Abe, who has been prime minister since December 2012, has cemented control of his party and is poised to become Japan's longest-serving leader in August 2021.

He has several policy challenges, including dealing with Japan's aging and declining population, a royal succession in the spring, and a consumption tax hike to 10 percent he has already delayed twice.

Amid international effort to denuclearize North Korea, Abe seeks to meet with Kim Jong Un to resolve their disputes, including the decades-old problem of Japanese citizens abducted to the North. He faces China's increasingly assertive activity in the region, and intensifying trade friction with the U.S. that could shake his friendly relations with President Donald Trump.

Abe said he will meet with Trump next week in New York, where they attend the annual U.N. assembly, to discuss bilateral trade and "the roles Japan and America should play in establishing global trade rules."

Abe renewed his commitment Thursday to push for a revision to the U.S.-drafted 1947 constitution, a decades-old pledge of the Liberal Democratic Party since its foundation in 1955 and a goal that none of Abe's predecessors has been able to achieve.

Many conservatives see the constitution as a humiliation imposed on Japan following its World War II defeat. Among them was Abe's grandfather, Nobusuke Kishi, who served as prime minister 1957-1960. Kishi was imprisoned as a suspected war criminal during the U.S. occupation.

Constitutional revision is divisive and it's unclear whether Abe could get enough votes for passage.

For the public, the constitution is a lesser concern than issues such as pay, education and the high cost of child care, surveys show.

If a revision is rejected in a national referendum, Abe would likely have to step down.

"It's a goal that would be difficult to achieve," Abe told a news conference later Thursday. "We'll have to walk on a thorny path."

Abe and his party want to rush a revision while their ruling coalition still holds a two-thirds super majority in both houses — a requirement to propose a revision. The next parliamentary election is due next summer.

Abe seeks to submit a draft constitution revision to a parliamentary session later this year. He is proposing to add a clause to Article 9, which bans the use of force in settling international disputes, to explicitly permit the existence of Japan's military, now called the Self-Defense Force.

Abe has survived a series of scandals, including cronyism allegations against him and his wife. Despite attacks from opposition parties and criticism in the media, he has seen his support ratings bounce back to about 40 percent, considered high for a Japanese leader after nearly six years in office.

An extended term for Abe is generally seen as good news for stability and continuity.

"A stable government under a strong leader is good for the economy and diplomacy, and Prime Minister Abe has established a rather significant presence in diplomacy," said Yu Uchiyama, a University of Tokyo politics professor.

But his long and strong leadership has caused a lack of political competitiveness, Uchiyama said.

"The biggest concern about Japanese politics is how to restore competition in politics and reactivate democracy," Uchiyama said.

Abe took 80 percent of parliamentarian votes, while support from regional rank-and-file party members was at 55 percent, though it fell within projections.

Experts see the margin of victory in regional member votes as a more accurate indicator of general public sentiment than the parliamentarian votes. Abe's softer showing there means he will have to be more mindful of voices coming from outside parliament.

Abe's dominance has been bolstered by the strengthening of the Prime Minister's Office, allowing him and his party executives to monopolize decisions over policies and personnel affairs, experts say. The system has accommodated Abe's long reign, as many lawmakers are primarily interested in getting Abe and other senior lawmakers' backing in elections.