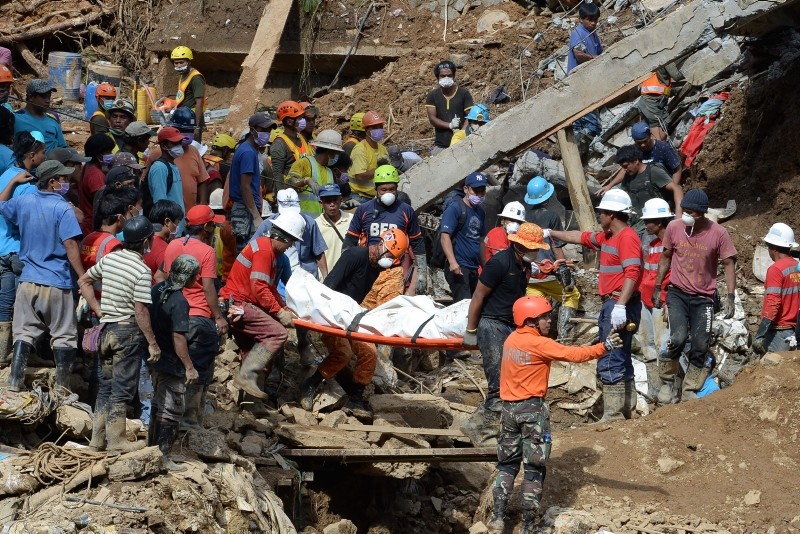 At least 155 people have been killed in landslides and other accidents caused by Typhoon Mangkhut and monsoon rains in the Philippines, officials said Sunday.

More than 70 people were still missing in the accidents, according to police and local disaster relief officials.

At least 45 of the dead were from the village of Tinaan in Naga City in Cebu province, 573 kilometres south of Manila, where a landslide buried nearly 60 houses on Thursday.

Thirty-four were still believed to be missing and rescuers were digging through the thick mud for the fourth straight day, said Baltz Tribunalo, head of the provincial disaster risk reduction office.

"We're hopeful that there are survivors this is why we're not stopping. We have so many spotters now in the area and some residents are also here to guide and help," he said.

Tribunalo said authorities were verifying reports that relatives of the victims were still receiving mobile phone text messages from some of those missing.

In the northern province of Benguet, search operations were also still continuing for at least 39 people missing in landslides, the biggest of which struck the village of Ucab in Itogon town.

Itogon town Mayor Victorio Palangdan said four backhoes were being used to recover the missing, adding that unidentified bodies were being buried in a mass graveyard site.

The Philippines is hit by an average of 20 cyclones every year, causing floods, landslides and other accidents.

One of the strongest in recent memory, Typhoon Haiyan, hit the country in November 2013, killing more than 6,300 people and displacing more than 4 million.