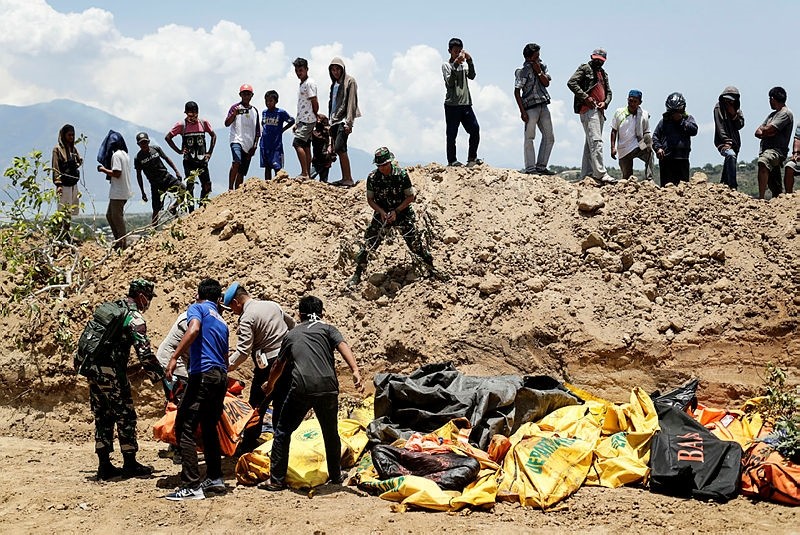 Indonesian rescuers carry a body bag of a disaster victim during a mass burial at a field in Palu, central Sulawesi, Indonesia, 01 October 2018. (IHA Photo)
by Daily Sabah with Wires
Oct 01, 2018 12:00 am

Volunteers in Indonesia have dug mass graves for over 1,000 dead bodies as of Monday after Sulawesi was struck with a quake and tsunami.

Indonesia is no stranger to natural calamities and Jakarta wanted to show that it was able to deal with a catastrophe that has killed 844 and displaced nearly 50,000 people, according to the latest count by the country's disaster agency.

But four days on, some remote areas have yet to be contacted, medicines are running out and rescuers are struggling with a shortage of heavy equipment to reach desperate victims calling out from the ruins of collapsed buildings.

In response, President Joko Widodo opened the door to the dozens of international aid agencies and NGOs lined up to provide live-saving assistance.

President Recep Tayyip Erdoğan spoke with Widodo on the phone on Monday, reiterating that Turkey is ready to provide every possible assistance to Indonesia in this time of disaster.

Officials fear the toll will rise steeply in the coming days and are preparing for the worst.

Indonesian troops boarded a naval ship Monday and headed to the hard-hit cities of Palu and Donggala. They'll join some 1,300 personnel already at site, including military and police.

They are bringing food, water and other supplies to the affected area.

At Poboya -- in the hills above the devastated seaside city of Palu -- volunteers dug a 100 meter-long grave to bury the dead, with instructions to prepare for 1,300 victims to be laid to rest.

Authorities are desperate to stave off any disease outbreak caused by decomposing bodies and have announced a 14-day state of emergency.

In Balaroa, a Palu suburb once home to a housing complex, the scale of the damage was apparent. A wasteland of flattened trees, shards of concrete, twisted metal roofing, doorframes and mangled furniture stretched out into the distance.

Dazed groups of people ambled over the wreckage, unclear where or how to start digging. Among them were three men looking for their younger brother.

Desperate survivors turned to looting shops for basics like food, water and fuel as police looked on, unwilling or unable to intervene.

"There has been no aid, we need to eat. We don't have any other choice, we must get food," one man in Palu told AFP as he filled a basket with goods from a nearby store.

Government officials said some 1,200 inmates fled at least three prisons in the region.

The disaster agency said a tsunami warning system, which might have saved lives, had not worked for six years due to a lack of money.

"Our funding has been going down every year," agency spokesman Sutopo Purwo Nugroho said.

Many have spent the last days desperately searching for loved ones while dealing with the trauma of the disaster.

Some 100 Indonesian troops have left the city of Makassar in southern Sulawesi island to help with rescue efforts in the country's quake- and tsunami-hit areas.