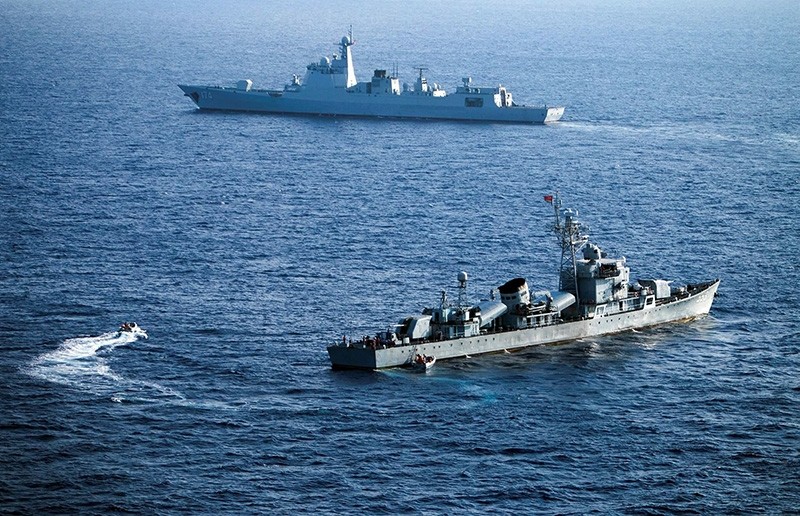 A Chinese destroyer came aggressively close to a U.S. Navy ship in the South China Sea, forcing it to maneuver to prevent a collision, the U.S. Pacific Fleet said Tuesday, describing an encounter that could worsen tensions between the nations.

The Chinese destroyer "conducted a series of increasingly aggressive maneuvers accompanied by warnings for Decatur to depart the area," Gorman said in an emailed statement.

It approached within 45 yards (41 meters) of the Decatur's bow, forcing it to maneuver, Gorman said.

China claims most of the strategic waterway and has built islands on reefs and equipped them with military facilities such as airstrips, radar domes and missile systems.

The Chinese defense ministry said Tuesday it opposes the U.S. warship's entry into the waters "around China's islands and reefs." It confirmed that the Luoyang, a Chinese missile destroyer, was immediately deployed to identify the U.S. warship and drive it away.

The Chinese foreign ministry said it strongly urged the U.S. to stop its "provocative" actions.

Relations between the U.S. and China have deteriorated over an escalating trade dispute. But ties have worsened in recent weeks with a U.S. decision to issue economic sanctions over the purchase of Russian fighter jets and surface-to-air missile equipment.

Beijing said the U.S. had no right to interfere in Chinese military cooperation with Russia. In response to the sanctions, China summoned the American ambassador and defense attache to deliver a protest, and recalled its navy commander from a U.S. trip.

U.S. Defense Secretary Jim Mattis has since dropped plans to visit China in October for talks.