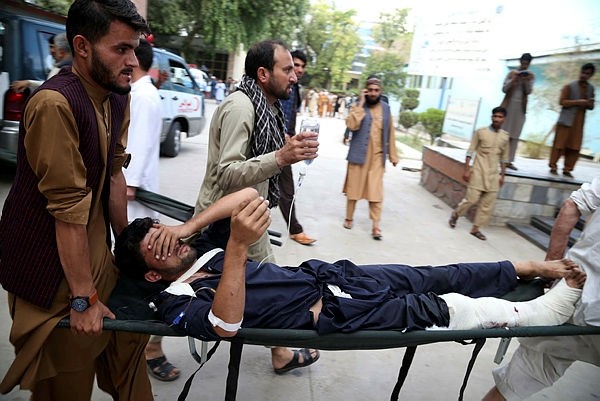 eople carry a man, who was injured in a suicide bomb attack at an election campaign in Kama district, to a hospital in Jalalabad, Afghanistan, 02 October 2018. (EPA Photo)
by Anadolu Agency
Oct 02, 2018 12:00 am

A suicide bomber targeted an election rally in eastern Afghanistan that killed at least 13 people and wounded more than 20 others, an official confirmed Tuesday.

He said the assault took place in Kama district at noon.

There has been no immediate claim of responsibility for the attack in the province marred by pro-Daesh insurgency.

Afghans are set to go to the long-due parliamentary elections on Oct. 20.

Currently, a nationwide campaign for the polls is underway with the candidates holding political rallies amid grim security concerns. The Taliban have warned people against taking part in the elections.

More than 2,500 candidates will contest the Oct. 20 poll, which is seen as a test run for next year's presidential vote and a key milestone ahead of a U.N. meeting in Geneva where Afghanistan is under pressure to show progress on "democratic processes." But preparations for the ballot, which is more than three years late, have been in turmoil for months, despite U.N.-led efforts to keep Afghan organizers on track.