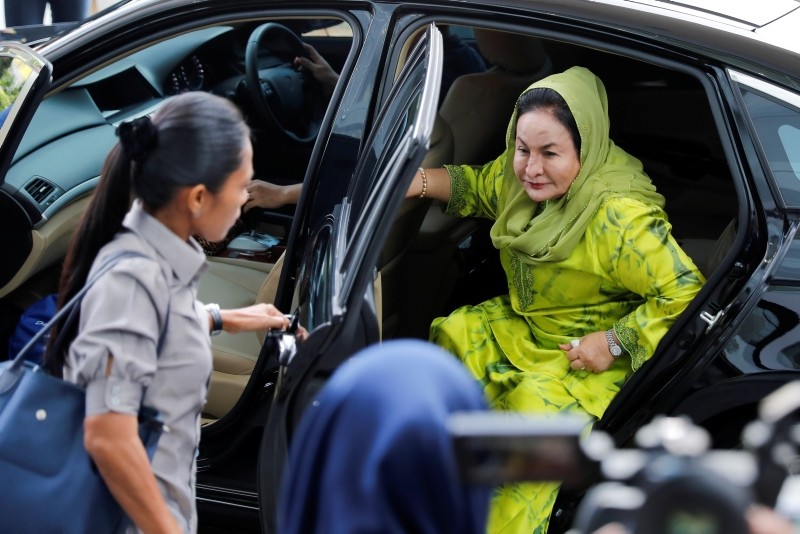 Malaysia's anti-graft agency said Wednesday that the wife of former Prime Minister Najib Razak has been arrested and will face money laundering charges in a graft scandal involving the 1MDB state investment fund.

The agency said Rosmah Mansor was detained at its headquarters in the Putrajaya government administrative center about four hours after she arrived for a third round of questioning by the Malaysian Anti-Corruption Commission (MACC) over alleged theft and money laundering at the fund.

Rosmah will be brought to court Thursday to face "several charges" under the anti-money laundering act, it said in a brief statement, without giving details.

Wearing a bright green traditional dress, Rosmah smiled at reporters but didn't speak as she was escorted earlier Wednesday into the agency's building. She was first summoned by the agency on June 5 and again on Sept. 26, when she was questioned for nearly 13 hours. Local media have reported that she could face up to 20 charges.

Najib himself has pleaded not guilty to multiple counts of money laundering, corruption, abuse of power and criminal breach of trust in the scandal and is to face trial next year.

Earlier Wednesday, Najib was questioned by the police commercial crime office over the 1Malaysia Development Berhad (1MDB) scandal. He dodged reporters waiting for him outside the building.

Najib, whose coalition suffered a stunning election defeat in May, faces 32 charges ranging from money laundering to abuse of power and criminal breach of trust in the effort to uncover how billions of dollars went missing from 1MDB.

Rosmah, 66, is widely reviled for her opulent lifestyle and penchant for expensive jewelry and designer Birkin bags that led to her being compared with former Philippine first lady Imelda Marcos and her extravagant collection of shoes.

Police found hundreds of luxury handbags, jewelry and cash — worth more than $266 million — during raids on apartments linked to the family shortly after Najib's shocking electoral defeat in May. Seized were 567 handbags, 423 watches and 12,000 pieces of jewelry, including 1,400 necklaces, 2,200 rings, 2,800 pairs of earrings and 14 tiaras. Najib has said the items were mostly gifts to his family.

In a biography in 2013, Rosmah said it was common for a prime minister's wife to receive expensive jewelry and gifts. She also said she had earned millions of ringgit from her own music album, which wasn't released to the public but was bought by government ministers who were fans of her singing talent.

Najib set up the 1MDB fund when he took power in 2009, but it accumulated billions in debts and is being investigated in the U.S. and several other countries. U.S. investigators say Najib's associates stole and laundered $4.5 billion from the fund from 2009 to 2014, some of which landed in Najib's bank account. They say $27.3 million was used to buy a rare diamond necklace for Rosmah.

Public anger over the scandal eventually led to the ouster of Najib's long-ruling coalition in May 9 elections that ushered in the first change of power since Malaysia's independence from Britain in 1957.

New Prime Minister Mahathir Mohamad, Razak's former mentor, reopened investigations into 1MDB that were suppressed under Najib's rule. He has also banned the couple from leaving the country.

Police have said investigations show that $972 million was transferred into Najib's bank accounts from three companies linked to 1MDB. Najib, 65, has accused Mahathir's government of seeking political vengeance against him and his family.

After the election loss, a stash of cash, jewelry and hundreds of designer handbags worth as much as $273 million was seized from properties linked to the couple in raids around Kuala Lumpur.

Rosmah is often compared to Imelda Marcos, who left behind more than a thousand pairs of shoes after her husband, Philippine President Ferdinand Marcos, was ousted in a popular uprising in 1986.