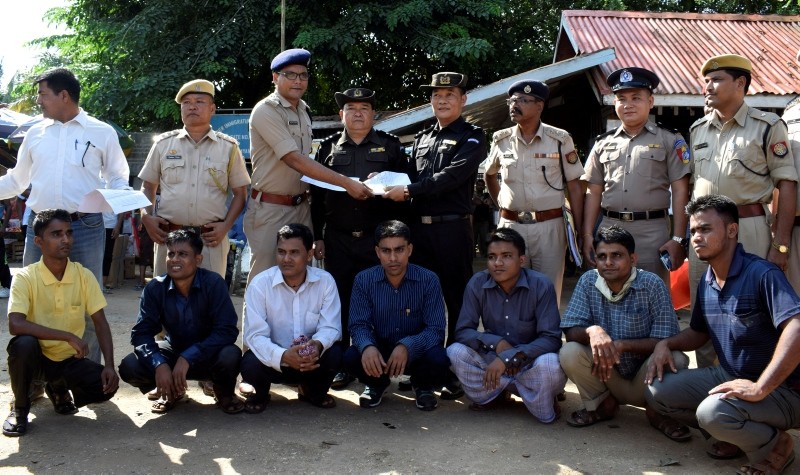 The seven Rohingya men to be deported sit as Indian and Myanmar security officials exchange documents before their deportation on India-Myanmar border at Moreh in the northeastern state of Manipur, India, October 4, 2018. (Reuters Photo)
by Associated Press
Oct 04, 2018 12:00 am

India on Thursday deported its first group of Rohingya Muslims since the government last year ordered the expulsion of members of the Myanmar minority group and others who entered the country illegally.

The deportation was carried out after the Supreme Court rejected a last-minute plea by the seven men's lawyer that they be allowed to remain in India because they feared reprisals in Myanmar. They were arrested in 2012 for entering India illegally and have been held in prison since then.

Indian authorities handed the seven over to Myanmar officials at a border crossing in Moreh in Manipur state, according to a document signed by border authorities. Each carried a bag of belongings.

Most Rohingya Muslims in Buddhist-majority Myanmar are denied citizenship and face widespread discrimination.

Amnesty India criticized the government's decision and said the seven men were at grave risk of being subjected to serious human rights violations by the Myanmar government.

It accused the Indian government of conducting "a relentless smear campaign" against the Rohingya community in India for over two years.

"This decision sets a dangerous precedent for all asylum seekers and refugees in India," said Aakar Patel, an official of the group. He urged the government to work with the United Nations High Commissioner for Refugees so as not to renege on human rights commitments.

Defense attorney Prashant Bhushan said the government should treat them as refugees, not as illegal migrants, and send a representative of the U.N. High Commissioner for Refugees to talk to them so they would not be deported under duress.

About 700,000 Rohingya have fled to Bangladesh since August 2017 to escape a brutal campaign of violence by Myanmar's military.

An estimated 40,000 other Rohingya have taken refuge in parts of India. Less than 15,000 are registered with the U.N. High Commissioner for Refugees.

Many have settled in areas of India with large Muslim populations, including the southern city of Hyderabad, the northern state of Uttar Pradesh, New Delhi, and the Himalayan region of Jammu-Kashmir. Some have taken refuge in northeast India bordering Bangladesh and Myanmar.

The Indian government says it has evidence there are extremists who pose a threat to the country's security among the Rohingya. India is fighting insurgencies in northern Kashmir and in its northeastern states.