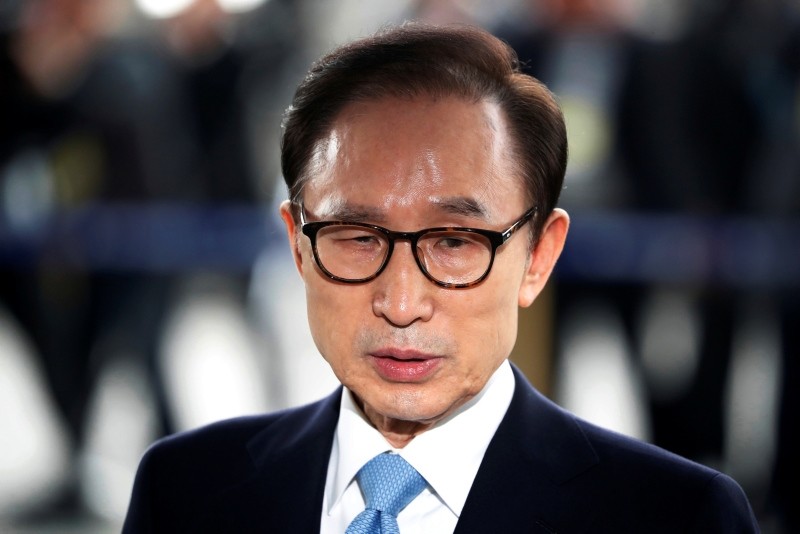 South Korea's former President Lee Myung-bak was convicted and sentenced to 15 years in prison Friday in a corruption case badly tainting his status as the country's first leader with a business background who once symbolized the country's economic rise.

Lee's conviction came six months after his successor and fellow conservative Park Geun-hye was convicted in a separate corruption scandal that triggered the country's biggest political turmoil in decades. She is serving 33 years in prison. The back-to-back scandals badly wounded conservatives in South Korea and deepened a national divide.

Few past South Korean leaders are free from corruption scandals. Before Lee and Park, former liberal President Roh Moo-hyun jumped to his death in 2009 amid a high-profile corruption investigation on his family. His liberal predecessor and Nobel Peace Prize winner Kim Dae-jung was forced to apologize at the close of his term after all three of his sons were arrested or embroiled in scandals.

On Friday, the Seoul Central District Court convicted Lee of embezzling 24.6 billion won ($21.7 million) from a company he owned; taking bribes from Samsung, one of his spy chiefs and a former lawmaker; causing a loss to state coffer; and committing other crimes. The court fined Lee 13 billion won ($11.5 million). It said Lee committed those crimes before and during his presidency, from 2008 to 2013.

Lee "has bitterly disappointed not only citizens who trusted and supported him but also our entire country," the court said in a televised verdict.

Lee, who has denied most of the allegations, didn't attend the court session, reportedly citing his health and in protest of a court decision to allow a live broadcast of Friday's trial. His lawyer said the live broadcast would hurt South Korea's international image and undermine national unity, according to Yonhap news agency.

Lee and prosecutors have one week to appeal, according to the Seoul court.

Before serving as president, Lee, 76, was one of the most famous businessmen in South Korea and had been a Seoul mayor.

He started at Hyundai Group in the mid-1960s and led the company's rapid rise at a time when South Korea's economy grew explosively from the rubble of the 1950-53 Korean War. Lee, who once peddled cheap snacks and ice cream on the streets as a poor teenager, started at Hyundai with an entry-level job and rose to various top company posts. He was dubbed a "salaryman legend" or a "bulldozer," and his success story was chronicled in popular TV dramas.

While serving as Seoul mayor from 2002 to 2006, Lee further built up his can-do image by pushing through an ambitious yet tough project to demolish an inter-city highway and open up a long-paved-over stream to create a new landmark in central Seoul.

Lee won the 2007 election by the widest margin in South Korean history owing to public hopes that he could revitalize the faltering economy. But his five-year term was eventually marred by a global financial meltdown, massive street protests over the resumption of U.S. beef imports and rising military animosities with North Korea.

Before his arrest, Lee accused the current liberal government of President Moon Jae-in of retaliating over the 2009 death of Roh, whose corruption investigation occurred when Lee was in office. Moon, who was Roh's friend and his presidential chief of staff, responded with fury, calling his accusation a challenge to South Korea's judiciary order. Previously, Moon called the Roh investigation politically motivated by the Lee government.