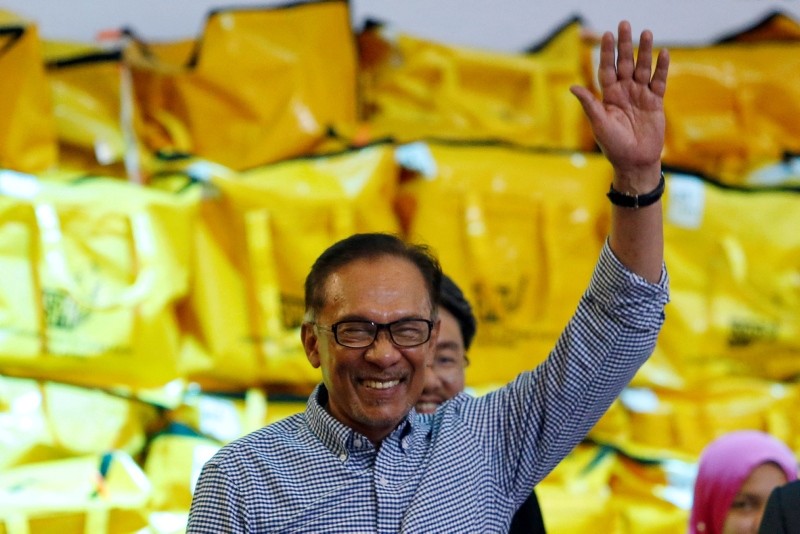 Malaysian politician Anwar Ibrahim won a by-election for a parliamentary seat with a landslide victory on Saturday in a grand political comeback to help him prepare for his eventual takeover from Prime Minister Mahathir Mohamad.

Anwar was designated as Mahathir's successor after the two men set aside a bitter feud and joined hands to capture a stunning victory in May's general election.

Anwar couldn't participate in the election due to a sodomy conviction — a charge that he alleged was politically motivated — but he was freed and received a royal pardon days after the polls.

The Election Commission said Anwar received 31,016 votes for the parliamentary seat in the southern coastal town of Port Dickson, defeating six other candidates. His closest rival secured only 7,456 votes.

Anwar said his huge margin of victory was unexpected and called it a "convincing" win.

"This to my mind is an important milestone, a vote of confidence for the government and the reform agenda, and the prime minister personally," he said.

Anwar, who will be sworn in as a lawmaker in parliament on Monday, reiterated his pledge to focus on parliamentary reforms.

Once a high-flying member of the former ruling coalition, Anwar was convicted of sodomy and corruption after a power struggle with Mahathir, who was prime minister for 22 years until 2003.

He was freed in 2004 but was once again convicted for sodomy in 2015, charges that he said were concocted to destroy his political career.

Angered by a massive corruption scandal at a state investment fund, Mahathir made a political comeback and the two men forged an alliance that paid off in the May 9 national election.

Mahathir, the world's oldest leader at 93, has said he expects to be in office for at least two years and will keep his promise to hand over power to Anwar.

"Attention should focus on what (Anwar) would do in parliament and his relationship with those in government," said Bridget Welsh, a political science lecturer and Southeast Asia expert at John Cabot University in Rome.