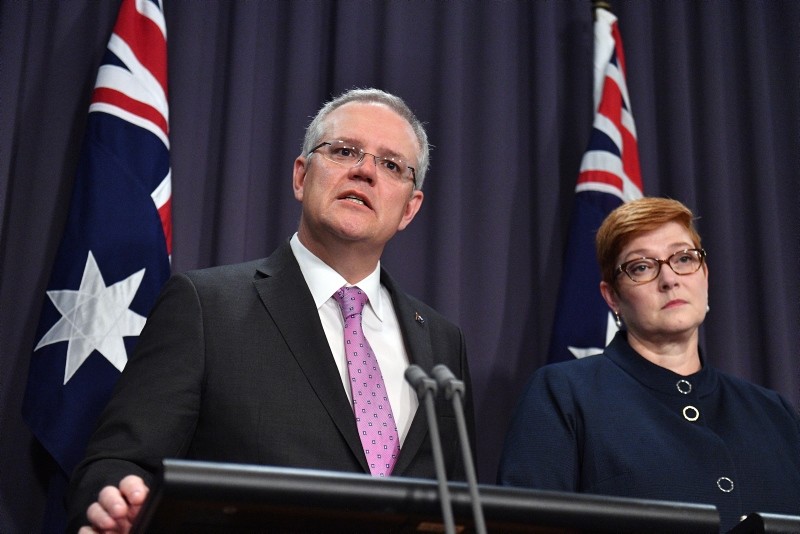 Prime Minister Scott Morrison, left, speaks to the media alongside Minister for Foreign Affairs Marise Payne during a press conference at the Parliament House in Canberra, Tuesday, October 16, 2018. (AP Photo)
by Compiled from Wire Services
Oct 16, 2018 12:00 am

Morrison, whose government faces a crucial by-election that could weaken its grip on power, said Canberra was open to recognizing Jerusalem as Israel's capital and moving its embassy there.

In a statement, Palestine's embassy in Australia called Morrison's announcement "deeply disturbing." It said short-term political gain "would surely be outweighed by the detriment both to Australia's international standing and in its relations with Arab and Muslim-majority countries."

The Palestinian Foreign Ministry on Tuesday accused Australian Prime Minister Scott Morrison of placing electoral concerns over his country's interest after the prime minister said he is considering moving Australia's embassy in Israel to Jerusalem.

"When the Australian prime minister took Israel's interests and the election campaign interests of his former ambassador to Israel, David Sharma, into consideration, he did not weigh the impact of this on his country's interests with the Arab and Islamic world," the Foreign Ministry said.

Morrison "ignored the votes of the Islamic and Arab communities in Australia while favouring the Jewish votes in David Sharma's district," the ministry added.

The Palestinians called on the prime minister to reconsider his statements

The decision prompted the 13 ambassadors to call a meeting in the Australian capital, Mohamed Khairat, Egypt's ambassador to Australia told Reuters by telephone.

"We have agreed that we will send a letter to the foreign minister expressing our worries and our concern about such a statement," he said.

"Any decision like that might damage the peace process ... this will have very negative implications on the relations between Australia and not only Arab countries but many other (Islamic countries) as well."

Such a move, which would follow U.S. President Donald Trump's controversial decision in December to do just that, would also reverse decades of foreign policy and inflame tension with some of Australia's Asian neighbors.

Indonesia, the world's largest Muslim-majority nation, and Australia are due to sign a trade deal this.

Indonesia's trade minister, Enggartiasto Lukita, denied Australian media reports on Tuesday that Jakarta was considering putting the pact on hold over the possibility of Canberra changing its stance on Israel.

Morrison's openness to recognizing Jerusalem and moving Australia's embassy there comes four days before a by-election in Sydney where his center-right coalition faces the risk of losing its tenuous hold on power.

The Sydney Morning Herald newspaper described Morrison's apparent change of heart as "unprincipled and craven" and he faced a torrid question time in parliament.

"The orthodoxy that's driven this debate which says issues like considering the question of the capital are taboo. I think we have to challenge that," Morrison said earlier in Canberra.

"No decision has been made regarding the recognition of a capital or the movement of an embassy ... but at the same time, what we are simply doing is being open to that suggestion," Morrison said.

In December, Australia refused to follow Trump's decision, which enraged Palestinians and upset the Arab world and Western allies, and has so far kept its mission in Tel Aviv.

The apparent change of policy was welcomed by Israel but swiftly criticized by Palestinian representatives.

Israel's Prime Minister Benjamin Netanyahu, whom Morrison had telephoned to explain his shift, said on Twitter he was "very thankful" Morrison was considering the move.

Israel regards all of the city, including the eastern sector that it illegally annexed after the 1967 Middle East war, as its capital while the Palestinians, with broad international backing, want East Jerusalem as the capital of a future state that they hope to establish in the occupied West Bank and the Gaza Strip.

The U.S. Embassy became the only foreign embassy in Jerusalem in May, but Netanyahu has attempted to persuade others to follow suit.