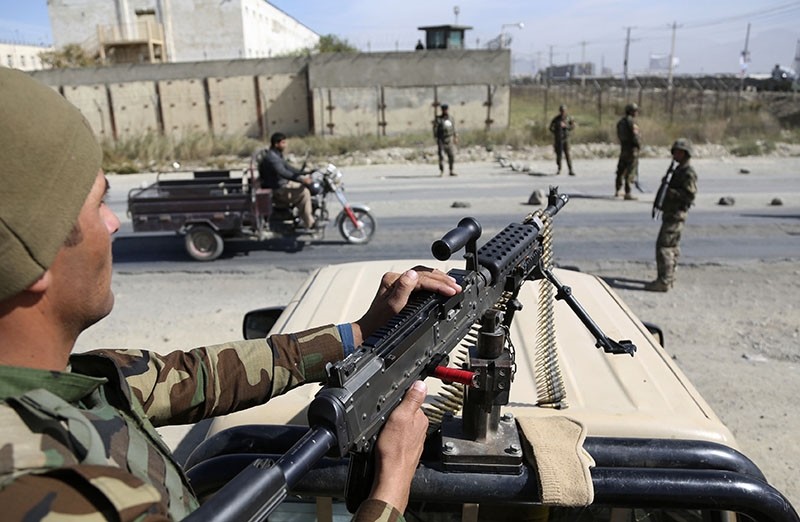 In this Wednesday, Oct. 17, 2018, photo, Afghan National Army soldiers stand guard at a checkpoint ahead of parliamentary elections, in Kabul, Afghanistan. (AP Photo)
by Compiled from Wire Services
Oct 19, 2018 12:00 am

Afghanistan's election commission has postponed Saturday's elections in Kandahar province for a week, following a deadly attack there that killed at least two senior provincial officials, including its powerful police chief.

The Independent Election Commission's deputy spokesman, Aziz Ibrahimi, says the decision on the postponement was made to allow mourners to observe funeral rites for the slain police chief, Abdul Raziq, and others killed in the attack.

Along with Raziq, the province's intelligence chief and two policemen were killed. The condition of Kandahar's governor, Zalmay Wesa, who was wounded in the attack, was shrouded in secrecy. Security officials in the capital, Kabul, maintained Wesa was wounded but survived.

Raziq's funeral was being held Friday in Kandahar's holiest of shrines, Kherqa Mubarak, said to contain the cloak of the Prophet Mohammed.

Afghanistan has been tense ahead of the Oct. 20 legislative election after the Taliban pledged to attack the ballot.

More than 2,500 candidates are competing for 249 seats in the lower house, including doctors, mullahs, and the sons of former warlords.

The election process has already been marred by bloody violence, with hundreds killed or wounded in recent months.

At least 10 candidates have been killed so far, including Abdul Jabar Qahraman who was blown up Wednesday by a bomb placed under his sofa in the southern province of Helmand.

The election is seen as a rehearsal for the presidential vote scheduled for April and an important milestone ahead of a U.N. meeting in Geneva in November where Afghanistan is under pressure to show progress on "democratic processes."