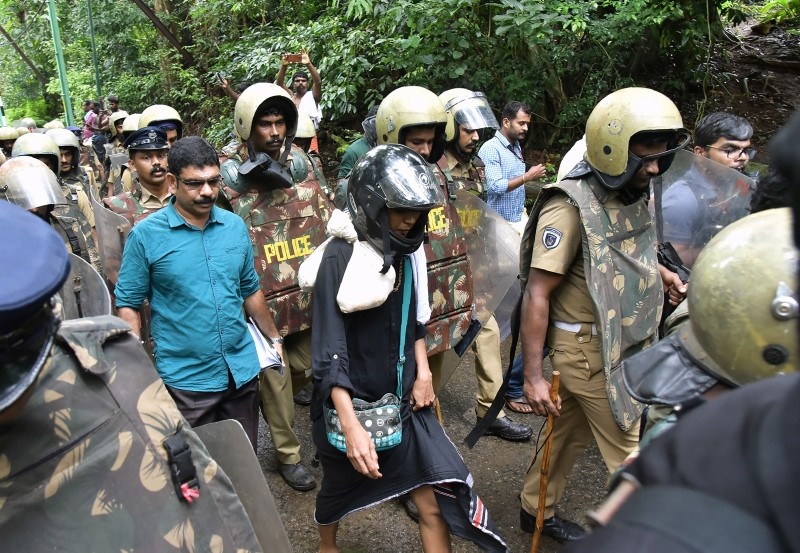 The priests threatened to stop rituals and prayers in the Sabarimala temple in southern Kerala state if women ages 10-50 tried to enter the shrine.

"We have decided to lock the temple and hand over the keys and leave. I stand with the devotees. I do not have any other option" said Kandararu Rajeevaru, the head priest.

Two young women, a journalist and an activist, were forced to turn back after they had reached the temple precincts under a heavy police escort.

Kadakampalli Surendran, a Kerala state minister, said the temple was not a place for activism and the government was not responsible for providing security to activists. He implied that authorities initially thought the two women were genuine devotees but at the end refused to enforce the court ruling to let them enter.

The minister's statement came despite the fact that the state government, run by the Communist Party of India (Marxist), vowed to implement the Supreme Court's ruling.

The two women were met with protests from the priests who sat on the steps leading to the temple, clapping and chanting religious hymns. Hundreds of police had set up a security ring as the two women trekked 5 kilometers (3 miles) to the temple complex.

Hundreds of protesters have blocked the entry of women of menstruating age since the temple reopened on Wednesday following the Supreme Court's ruling on Sept. 28 that says equality is supreme irrespective of age and gender.

The temple will remain open for five-day monthly prayers until Oct. 22.

Protesters vowed to file a petition with the Supreme Court next week seeking a review of the ruling. They say the celibacy of the temple's presiding deity, Lord Ayyappa, is protected by India's Constitution, and that women of all ages can worship at other Hindu temples. Some Hindu figures consider menstruating women to be impure.

The Travancore Devaswom Board, which runs the temple, held a meeting Friday and decided to file an affidavit in the Supreme Court next week highlighting the "grave situation prevailing at the temple,'" said A. Padmakumar, the board president.

The entry of women between the ages of 10 and 50 to the centuries-old temple was banned informally for many years, and then by law in 1972.

In 1991, the Kerala High Court confirmed the ban until it was struck down by India's Supreme Court.