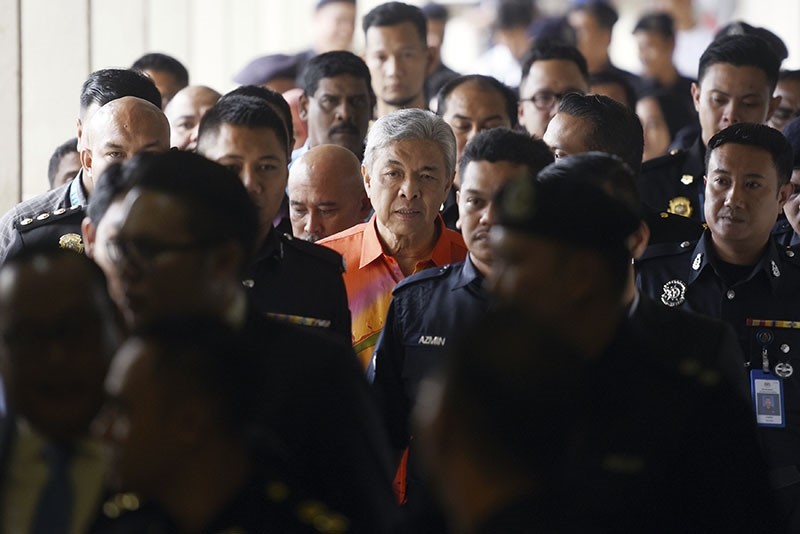 Malaysian former Deputy Prime Minister Ahmad Zahid Hamidi was charged on Friday with 45 offenses including money laundering and graft amid a widening crackdown on corruption.

Ahmad Zahid leads the opposition as president of the United Malays National Organisation (UMNO), the once-powerful party that ruled Malaysia for 60 years before being ousted in a shock general election defeat in May.

He is the latest former high-ranking official to be charged with suspected graft since the election victory of a coalition led by Mahathir Mohamad.

He pleaded not guilty to all charges, Bernama said.

Ahmad Zahid, also the former home minister, was accused of using his position to receive bribes in exchange for helping companies win contracts for ministry projects, the news agency reported.

In one case, he was alleged to have accepted 6 million ringgit ($1.4 million) from a director of Datasonic Group Berhad that had secured a five-year government contract to supply 12.5 million electronic chips for Malaysian passports.

Shares of Datasonic slumped as much as 43 percent on the national stock exchange before paring some losses to trade down 28 percent.

Datasonic said neither the company nor any company official made a payment to Ahmad Zahidi.

My EG said the company had never made any payments to any party to secure contracts. Its shares fell as much as 30 percent before the stock exchange suspended trading.

Ahmad Zahidi was also accused of misusing funds from his family-run charity foundation.

Each of the 45 charges carries a jail term of up to 20 years, with fines of up to five times the value of the illegal transactions for the money laundering and abuse of power offences.

They have pleaded not guilty, with Najib's trial due to begin next year.