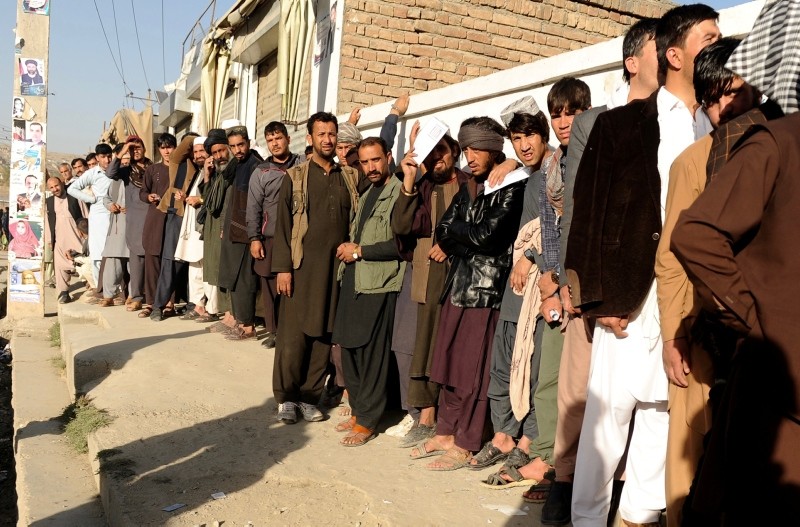 Nearly 170 Afghan citizens have been killed or wounded in poll-related violence Saturday as the election turned violent with many polling centers open very late or not at all, official figures showed.

In the latest attack, a suicide bomber blew himself up inside a Kabul polling centre, killing at least 15 people and wounding 20, police said, taking the number of casualties across the Afghan capital to 19 dead and nearly 100 wounded.

There was no immediate claim of responsibility for the blast, but the Taliban said earlier it had carried out more than 300 attacks on the "fake election" across the war-torn country.

Violence also disrupted voting in the northern city of Kunduz where a senior health official told AFP three people died and 39 were wounded after more than 20 rockets rained down on the provincial capital.

Eight explosions were recorded in the eastern province of Nangarhar, with two people killed and five wounded, the provincial governor's spokesman said.

The interior ministry put the overall casualty toll -- including civilians and security forces -- slightly lower at 160, with 27 civilians killed and 100 wounded.

There were 193 attacks across the country, which the ministry said was half the number recorded on the day of the 2014 presidential election.

Initial figures showed at least 1.5 million voters turned up at polling centres in 27 provinces, election organisers said -- a fraction of the nearly nine million voter registrations. Many voters waited hours for the doors to open.

Most polling sites opened late after teachers employed to handle the voting process failed to show up on time, said the IEC.

The election commission, which has been skewered over its shambolic preparations for the long-delayed ballot, said they would extend voting until Sunday for 371 polling centres after hiccups with voter registration lists, biometric verification devices and staffing.

University student Mohammad Alem said he felt "frustrated" after spending more than three hours trying to vote in the northern city of Mazar-i-Sharif, only to discover his name was not on the registration list.

"There also were some problems with the biometric devices because they were already running out of charge," he said.

After waiting four hours at a polling centre, Tabish Forugh tweeted he had not seen "even remotely similar... chaos" at previous elections.

The parliamentary election is more than three years late and only the third since the fall of the Taliban in 2001.

Turnout was likely affected after the Taliban issued several warnings in the days leading up to the poll calling on candidates to withdraw from the race and for voters to stay home.

Hundreds of people were killed or wounded in the months before the poll.

The killing of a powerful police chief in the southern province of Kandahar on Thursday further eroded confidence in the ability of security forces to protect voters.

Voting in Kandahar has been delayed by a week following the attack.

Despite the risks, President Ashraf Ghani urged "every Afghan, young and old, women and men" to exercise their right to vote, after casting his ballot in Kabul.

Photos posted on social media showed scores of men and women clutching their identification documents lining up outside voting centres amid a heavy security presence.

A woman dressed in a burqa leaving a polling centre in Mazar-i-Sharif told AFP she had been worried about "security incidents", but decided to vote anyway.

At least 10 candidates out of more than 2,500 contesting the lower-house election were killed ahead of the poll.

Most of those standing are political novices, and include doctors, mullahs and journalists. Those with the deepest pockets are expected to win.

The poll is seen as a crucial test for next year's presidential election and an important milestone ahead of a UN meeting in Geneva in November where Afghanistan is under pressure to show progress on "democratic processes".

Preliminary results are scheduled to be released on November 10 but there are concerns they could be thrown into turmoil if the biometric verification devices are broken, lost or destroyed.

Votes cast without the controversial machines will not be counted, the IEC has said.