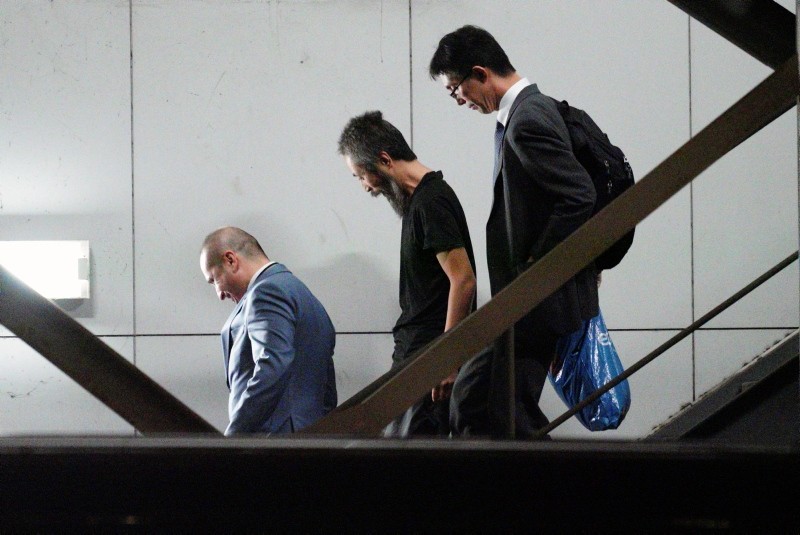 Japanese journalist Jumpei Yasuda, center, is escorted by staff upon his arrival at Narita International Airport in Narita, north of Tokyo Thursday, Oct. 25, 2018. (AP Photo)
by Compiled from Wire Services Oct 25, 2018 12:00 am

A Japanese journalist returned to Tokyo on Thursday after being freed from more than three years of captivity in Syria.

Jumpei Yasuda was released on Tuesday and taken to neighboring Turkey.

Yasuda, wearing a black T-shirt, was escorted from his plane at Tokyo's Narita Airport by Japanese officials and ushered into a black van. He left without talking to a large group of reporters who had waited for his arrival.

On an earlier flight from the southern Turkish town of Antakya to Istanbul, Yasuda said he was happy to be going home after living in "hell" for more than three years, but was worried about how he will catch up with a changed world.

"I'm so happy to be free," he told Japan's NHK television on a flight from Antakya in southern Turkey to Istanbul. "But I'm a bit worried about what will happen to me or what I should do from now on."

Yasuda, 44, who was kidnapped in 2015 by al-Qaida's branch in Syria, said he felt as if he'd fallen behind the rest of the world and was uncertain how to catch up.

He described his 40 months in captivity as "hell" both physically and mentally. He said he was kept in a tiny cell and tortured. There was a time when he was not allowed to bathe for eight months, he said.

"Day after day, I thought 'Oh I can't go home again,' and the thought took over my head and gradually made it difficult for me to control myself," he said.

He was, he added, struggling to speak Japanese.

Yasuda was kidnapped by a group known at the time as Nusra Front. A war monitoring group said he was most recently held by a Syrian commander with the Turkistan Islamic Party, which mostly comprises Chinese militants in Syria.

Yasuda said he believes he was moved several times during his captivity but stayed in Syria's northwestern province of Idlib, where he sometimes heard distant firebombing.

"I was living in endless fear that I may never get out of it or could even be killed," Yasuda told another Japanese broadcaster, TBS. He said he gradually became pessimistic about his fate because his captors kept breaking their promises to release him.

His release Tuesday came suddenly when his captors drove him to the border with Turkey and dropped him off and handed him over to Turkish authorities, he said.

Japanese officials say Qatar and Turkey helped in the efforts for Yasuda's release, though their exact roles were not clear. Prime Minister Shinzo Abe thanked authorities in Turkey and elsewhere for their help in freeing Yasuda.

Yasuda's case rekindled a debate in Japan about reporting from war zones that some see as reckless adventurism and others as courageous journalism.

Yasuda, a respected journalist who began his career at a local newspaper, started reporting on the Middle East in the early 2000s and went to Afghanistan and Iraq.

He travelled to Iraq in late 2002 using his paid leave at the Shinano Mainichi newspaper where he had written about environmental problems, food safety and family issues. Frustrated that his paper wouldn't send him on assignment there, he quit in 2003 and in 2004, on another trip to Iraq, was captured near Baghdad by militants, who held him for three days along with three other Japanese, but he was freed after Islamic clerics negotiated his release.

In a book he published the same year, he explained that he had undertaken the assignment because he wanted to show the suffering caused by the war.

"I could not see faces of people living in the country which was called part of an 'axis of evil' from any information provided by Japanese media, which only reported diplomatic matters and inspections by the United Nations," he wrote.

Yasuda returned to Iraq in 2007 to work as a cook at an Iraqi army training camp and in 2010 published a book in Japan about war zone laborers. He also wrote articles about his 2004 captivity.

But this time, his captors took away all his reporting equipment including his camera, depriving him of any tangible records.

"I was robbed of all my luggage, and that made me so angry," Yasuda said. "I couldn't do any of my work for 40 months."

His last work in Syria involved reporting on his friend Kenji Goto, a Japanese journalist who was taken hostage and killed by Daesh terrorists. His friend he had tried to free, Haruna Yukawa, was also beheaded by Daesh. Both were lambasted in Japan for their decision to travel to Iraq.

Earlier, in 2004, a Japanese high school graduate, an aid worker and a freelance photographer taken hostage in Iraq were also condemned as irresponsible after their release. Japan is careful to stay out of disputes in the Middle East and tries to maintain friendly ties with countries such as Iran and Saudi Arabia that are at loggerheads.

"There was bashing before and it appears it is already happening this time," freelance journalist Kosuke Tsuneoka, a friend of Yasuda, told Reuters in a telephone interview. "Yasuda is tough and has great mental strength. I'm not worried he will be hurt."

As Yasuda flew to Japan, some on social media were already condemning him.

"After he returns, I want him to hold a news conference to apologize and work to pay back the ransom. I don't need to hear his opinion," tweeted a person with the Twitter handle "kawako".

The Japanese government has denied paying a ransom for Yasuda's release.

"Was it really necessary to rescue him again, paying a huge amount of ransom?" tweeted another person with the Twitter handle "massa.kongo".

That kind of criticism could make it difficult for journalists to cover the region in the future, according to Yoshihiro Kando, a former Asahi newspaper reporter.

"I am worried that the atmosphere becomes such that one should not go because it is dangerous and the trend is toward self-restraint," he wrote on the website for the Association of Japanese Journalists Working in Dangerous Areas.

Syria has been one of the most dangerous places for journalists since the conflict there began in March 2011, with dozens killed or kidnapped.