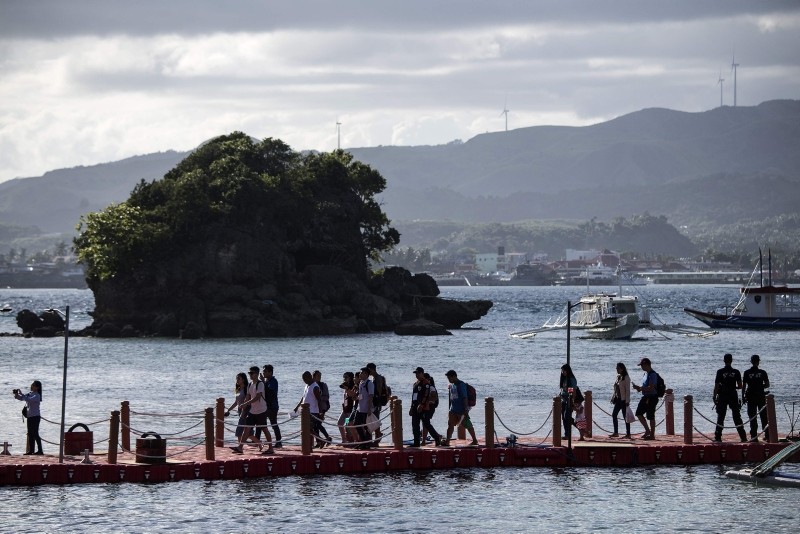 The Philippines opened the doors Friday to a spruced up and newly regulated Boracay, its famous holiday island that was shuttered to mend decades of harm caused by unchecked tourism.

The white sand idyll was closed to visitors in April after President Rodrigo Duterte called it a "cesspool" tainted by raw sewage flowing from hotels and restaurants straight into the sea.

But the re-christened resort has a slew of new rules that restrict boozing and smoking on the beach, limit the number of tourists and hotels, all while a renovation spree is ongoing.

Among the first visitors to land just after dawn on Friday were first-timers attracted by the prospect of a cleaner, less crowded island.

"When I saw pictures of tourists in Boracay lying like sardines in a can, I didn't want to come here," German visitor Josef Fuchs, 61, told AFP. "Now I expect to have a few good days here."

Once a quiet hideaway favored by backpackers, the tiny island was transformed by overdevelopment into a mass destination seeing some two million visitors per year.

Under the new regime, the beachfront is cleared of the masseuses, vendors, bonfires and even the builders of its famous photo-op sandcastles it was once crowded with.

Buildings were bulldozed and businesses pushed back to create a 30-meter (98-foot) buffer zone from the waterline.

Construction is everywhere with road repairs, hotels and resort renovations happening around the island.

All water sports save for swimming are also banned for the time being, while Boracay's three casinos have been permanently shut down in line with Duterte's wishes.

Yet it was seeing up to 40,000 sun worshippers at peak times, with tourists spending $1 billion a year but also leaving mountains of garbage and an overflowing sewer system.

The new rules say 19,200 tourists will be allowed on the island at any one time, with the government aiming to enforce that by controlling the number of available hotel rooms.

Nearly 400 hotels and restaurants deemed to violate local environmental laws have already been ordered closed and airlines as well as ferries were told to restrict service to the area.

Drinking and smoking are banned and the huge multi-day beach parties dubbed "LaBoracay" that drew tens of thousands of tourists during the May 1 Labor Day weekend will be a thing of the past.

Tourism Secretary Bernadette Romulo-Puyat said last week she hopes the new Boracay will be the start of a "culture of sustainable tourism" in the Philippines, adding other tourist destinations will be next.

Tens of thousands of workers were left unemployed when the island's tourism machine was deprived of visitors.

"Life will go back to normal. We will have money and work again," said Jorge Flores, 45, a hotel worker. "In the past six months, hotels here were like... a ghost town."

Other places in the region strained by mass tourism have also used closures as a tactic to protect the sites from destruction.

Thai authorities announced in October that the glittering bay immortalized in the movie "The Beach" will be closed indefinitely to allow it to recover from the impact of hordes of tourists.