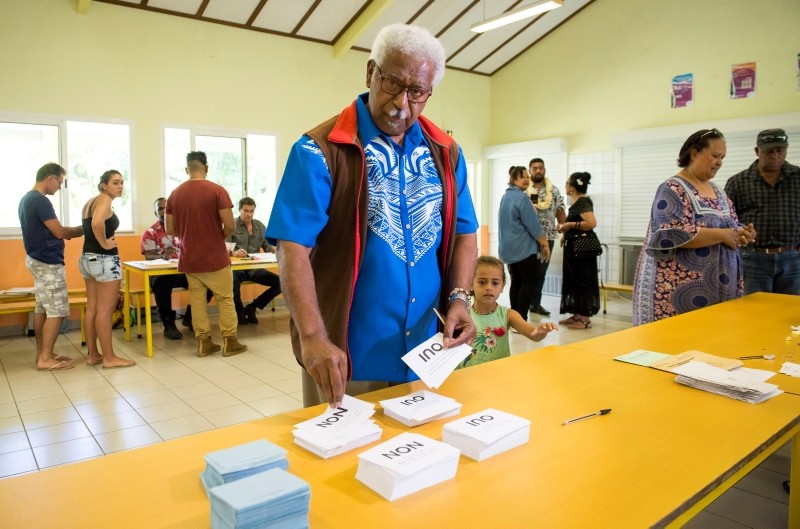 Roch Wamytan, a former leader of the independentist party, Union Caledonienne, prepares to cast his vote at a poling station in Le Mont-Dore, New Caledonia, during an independence referendum, Sunday, Nov. 4, 2018. (AP Photo)
by Compiled from Wire Services Nov 04, 2018 12:00 am

A majority of voters in the South Pacific territory of New Caledonia chose to remain part of France instead of backing independence, election officials announced Sunday as French President Emmanuel Macron promised a full dialogue on the region's future.

The decision to keep ties with France was watershed moment for the archipelago that lies east of Australia and has sun-kissed lagoons as well as a nickel mining industry. The independence referendum itself was a milestone in New Caledonia's three-decades-long decolonization process, which was borne out of deep resentment by the region's native Kanaks of decades of ill treatment by their European colonizer.

The poll had a record-high participation rate of 80.6 percent of registered voters — so many that some polling stations in the capital, Noumea, had to stay open about an hour longer than planned Sunday to handle the crush.

Observers were already expecting a majority to favor remaining a part of France, based on opinion polls and previous election results.

Posters calling for a "no" vote said that "France is the only chance" while the proponents of independence called in their posters to vote for "a multicultural, in solidarity, peaceful nation."

"I'm asking everyone to turn toward the future to build tomorrow's New Caledonia," Macron said, speaking from the presidential Elysee Palace in Paris. "The spirit of dialogue is the sole winner."

Praising both sides for their "responsible" campaigns, Macron added that "contempt and violence" were the only losers in the historic poll.

The high commissioner's office reported limited outbreaks of unrest in Noumea as votes were counted, with seven cars set ablaze, some roads closed and two instances of stone-throwing. But otherwise the vote was overwhelmingly peaceful.

It is the first auto-determination vote to be held in a French territory since Djibouti in the Horn of Africa voted for independence in 1977.

Prime Minister Edouard Philippe is set to meet with New Caledonian officials Monday morning for talks about the political future of the territory of 270,000 people. New Caledonia receives about 1.3 billion euros ($1.5 billion) in French state subsidies every year, and many had feared the economy would suffer if ties were severed.

New Caledonia, a cluster of islands, is home to about 270,000 people. They include the native Kanaks, who represent about 40 percent of the population, people of European descent (about 27 percent) and others from Asian countries and Pacific islands.

It relies on France for defense, law enforcement, foreign affairs, justice and education, yet has a large degree of autonomy. New Caledonia receives about 1.3 billion euros ($1.5 billion) in French state subsidies every year, and many fear the economy would suffer if ties are severed. Its nickel deposits are estimated to represent 25 percent of the world's total and tourism.

During a visit to the archipelago in May, Macron acknowledged the "pains of colonization" and saluted the "dignified" campaign for autonomy led by the Kanaks. He and his administration have sought to strike a neutral tone on the vote.

The referendum was the result of a process that started 30 years ago to end years of violence between supporters and opponents of separating from France. The violence, which overall claimed more than 70 lives, prompted a 1988 deal between rival loyalist and pro-independence factions. Another agreement a decade later included plans for an independence referendum. Most Kanaks have tended to back independence, while most descendants of European settlers have favored keeping the French connection.

"I don't necessarily want our lives to change," the 50-year-old said.

Others hailed the ballot as historic.

"We've been waiting for 30 years for this vote," said Mariola Bouyer, 34. "This vote must demonstrate that we want to live in peace, no matter our race, our roots. It's building a country together."

First discovered by the British explorer James Cook, the New Caledonia archipelago lies more than 16,700 kilometers (10,377 miles) from France. It became a French colony in 1853.

Under colonial rule the Kanaks were confined to reserves and excluded from much of the island's economy. The first revolt erupted in 1878, not long after the discovery of large nickel deposits that are today exploited by French miner Eramet's subsidiary SLN.

More than 100 years later, in the mid-1980s, fighting broke out between supporters of independence and those who wanted to remain French, amid festering anger over poverty and poor job opportunities.

A 1988 massacre in a cave on the island of Ouvea left 19 indigenous separatists and two French soldiers dead and intensified talks on the island's future. A 1998 deal provided for a referendum on independence to be held by the end of 2018.