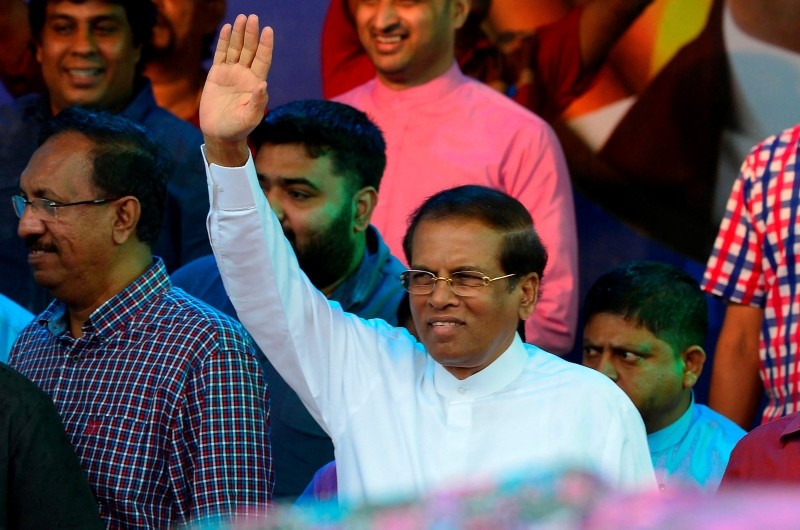 The government printer published a notification signed by Sirisena announcing the dissolution of Parliament effective at midnight Friday.

The notice says names of candidates for new elections will be called for one week from Nov. 19, and the election will be held on Jan. 5. The new Parliament is to be convened on Jan. 17.

Sri Lanka has been in a political crisis since Oct. 26, when Sirisena fired his prime minister, Ranil Wickremesinghe, and replaced him with former strongman Mahinda Rajapaksa.

Wickremesinghe has insisted his firing is unconstitutional. He has refused to vacate his official residence and demanded that Parliament be summoned to prove he had support among its members.

There were also calls both locally and internationally to convene Parliament to end the impasse.

Sirisena maintained his choice for prime minister, Mahinda Rajapaksa, had a majority in Parliament, but the decision to dissolve Parliament shows that is not so.

"The dissolution clearly indicates that Mr. Sirisena has grossly misjudged and miscalculated the support that he might or could secure to demonstrate support in the Parliament," said Bharath Gopalaswamy, director at New Delhi-based analyst group Atlantic Council's South Asia Center.

"At the end of the day, he is a victim of his own homegrown crisis."

Wickremesinghe's camp is likely to contest Sirisena's move because of constitutional provisions stating a Parliament can't be dissolved until four and a half years after its inception. The current Parliament was elected in August 2015.

Wickremesinghe or his party officials could not be contacted immediately for comment.

Rajapaksa indicated what was coming hours before the dissolution in a speech. He said the government must go to the people for confirmation on whether the president made the correct decision when he appointed him as prime minister.