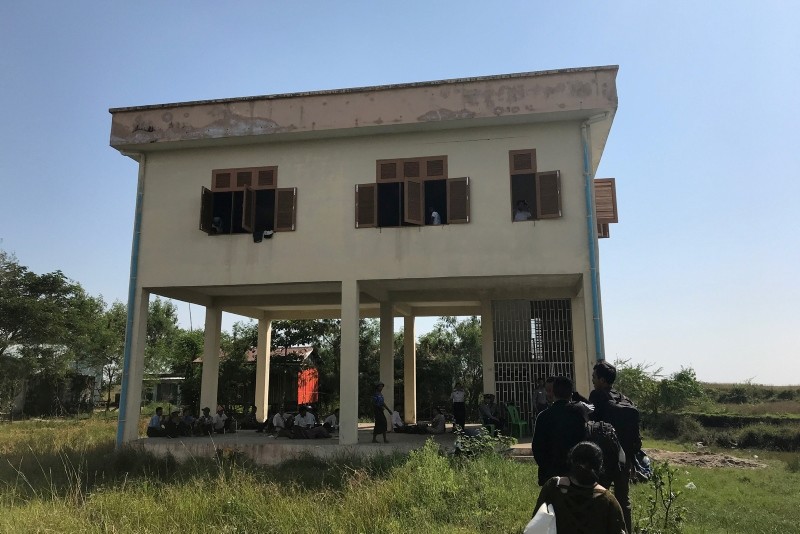 View of a building where suspected Rohingya Muslims are detained by Myanmar immigration authorities after arriving aboard of a boat at Thande village outside Yangon, Myanmar, November 16, 2018. (REUTERS Photo)
by Nov 16, 2018 12:00 am

Myanmar immigration authorities detained more than 100 suspected Rohingya Muslims aboard a boat off Yangon on Friday, officials said, raising fears of a fresh wave of dangerous voyages after a 2015 crackdown on people smugglers.

The boat carrying 106 people was stopped in the early morning some 30 km (20 miles) south of Myanmar's largest city and police were on the way to investigate, Kyaw Htay, an immigration officer from Kyauktan township, told Reuters by phone.

Many people in Buddhist-majority Myanmar refer to the Rohingya as "Bengali", implying they are illegal immigrants from Bangladesh. Myanmar does not consider the Rohingya a native ethnic group.

Officials and aid workers told Reuters last week that dozens of Rohingya in Myanmar and Bangladesh had boarded boats to try to reach Malaysia in recent weeks after the end of the monsoon rains in early October.

Observers warn that because the smuggling routes to Thailand have been disrupted and the journey is treacherous and expensive, more and more Rohingya are opting for a cheaper and shorter trip along the Bay of Bengal coast south to Yangon.

It resembled vessels the Rohingya typically use to escape the apartheid-like conditions in Rakhine, where they are denied free movement and access to decent education and healthcare.

For years, Rohingya on both sides of the border have boarded boats organised by smugglers in the dry months between November and March, when the sea is calm. The perilous journey to Thailand and Malaysia, often undertaken in overcrowded vessels, has cost many lives.

Thailand cracked down on the trade after discovering a series of mass graves in 2015, leading to a crisis when smugglers abandoned their human cargo and left boats adrift in the Andaman Sea.