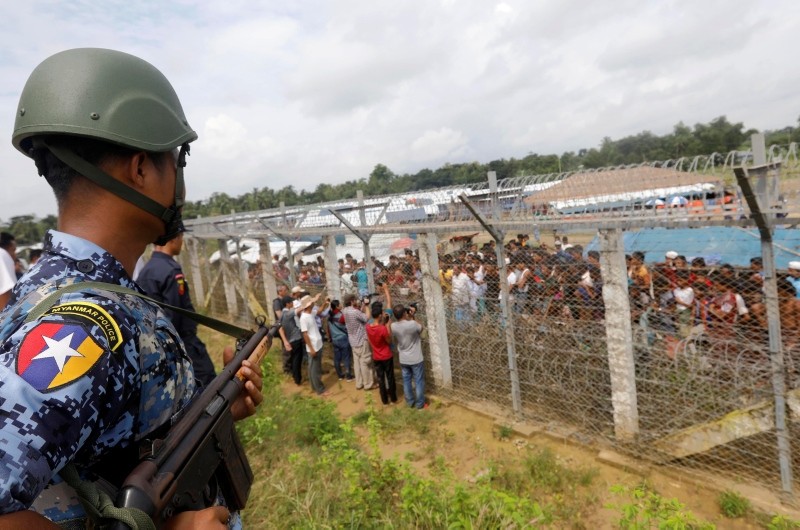 Myanmar police opened fire in a camp for internally displaced persons (IDPs) in the country's Rakhine State on Sunday, an eyewitness and a lawmaker said.

The incident left at least four people injured, according to the eyewitness.

Police were carrying out an operation to arrest two owners of a boat carrying Rohingya that landed near Yangon on Friday, said the witness, a 27-year-old resident at the Aw Nauk Ye IDP camp.

"Around 35 police were in the camp and were surrounded by people. They attacked us by throwing stones," police officer Than Htay said.

Photos and videos shared on Facebook by the Arakan Times, a media outlet that covers Rohingya affairs, showed men with bleeding wounds and spent bullets, apparently from the scene. The footage could not be independently verified by DPA.

"Police went there and looked for the criminals. Then the people from the IDPs surrounded the police and attacked them by throwing stones," local lawmaker Aung Kyaw Htwe told DPA.

"That's why they [police] ordered them to step back then they shot into the air."

He did not say whether police shot into the crowd.

Buddhist-majority Myanmar denies Rohingya access to education, healthcare and freedom of movement. The Muslim minority is not allowed to leave designated areas of their native Rakhine State in the country's west.

In August 2017, Myanmar launched a brutal military crackdown against Rohingya in Rakhine, leading the U.N. to accuse Myanmar of "genocidal intent."

On Thursday, Bangladesh halted a repatriation program aimed at returning Rohingya refugees to Myanmar after they refused to go back.

The U.N. and rights groups have warned against repatriation, saying the Rohingya's safety and rights cannot be guaranteed.