Taiwan or Chinese Taipei: Voters to decide which name should be used for the Olympics 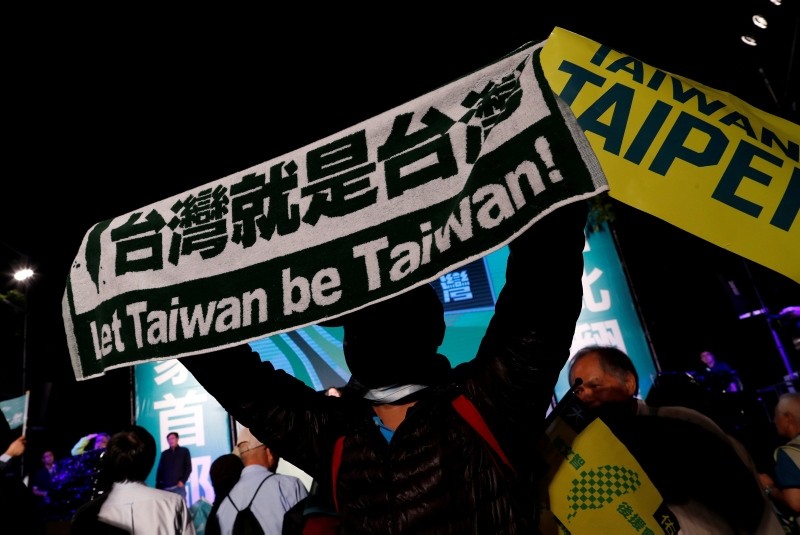 Athletes from Taiwan compete at the Olympics under the name of a make-believe country: Chinese Taipei. They march behind an imaginary national flag and, if they win a gold medal, hear an "alternate national anthem" being played.

Imagine if France or Australia had to use an assumed name at the Olympics, or the United States and Japan were banned from flying their flags.

A referendum to challenge this will be held in Taiwan on Saturday. It asks if the self-governing island should compete in international sports events — including the 2020 Tokyo Olympics — as "Taiwan" instead of "Chinese Taipei."

No matter what voters want, nothing is likely to change.

The government of the People's Republic of China (PRC), which controls the Chinese mainland and islands in the South China Sea, has viewed Taiwan, officially known as the Republic of China, as a renegade province since the two separated in the 1949 civil war. The International Olympic Committee backs China, which will host the 2022 Winter Olympics after spending $40 billion on the 2008 Summer Olympics in Beijing.

In a statement to the Associated Press, the IOC said it will not alter the 1981 Lausanne Agreement that Taiwan must compete as Chinese Taipei. Its executive board repeated that stance in meetings on May 2-3.

"The agreement remains unchanged and fully applicable," the IOC said.

That puts the Chinese Taipei Olympic Committee in a bind.

If the referendum passes, it could be required by Taiwanese law to go ahead with the name change pending approval from the legislature.

But in a statement to AP, it said "we are bound by the Olympic Charter, the agreement we signed with the IOC in 1981, and also by the IOC executive board decision."

Taiwan's athletes are caught in the middle. Dozens protested Wednesday, fearing they could lose their chance to participate in the Olympics.

The Taiwanese government has reassured athletes of their right to compete at the 2020 Olympic Games in Tokyo ahead of a weekend name change referendum.

"We will respect the result of the referendum," Foreign ministry spokesman Andrew Lee said Thursday.

Lee said the ministry will work with both the education ministry and the Chinese Taipei Olympic Committee (CTOC), which represents the country within the IOC, to ensure Taiwanese athletes' right to participate.

On Wednesday, more than 50 renowned athletes told a news conference, organized by the CTOC, that they were against the referendum, urging the public to vote No.

Even if Taiwan was booted out, the IOC has frequently let athletes compete under an independent Olympic flag.

Jacqueline Yi-ting Shen, the secretary general of the Chinese Taipei Olympic Committee, declined to comment for this article. But she spoke about Taiwan's predicament in an interview with the AP at the Asian Games in August.

"This gives us a chance to compete and make our strength known internationally, so we accept the pity that we have to compete under the name of Chinese Taipei," Shen said.

She added: "I'm sure that many people (in Taiwan) feel dismayed. But quite a lot understand that it is the reality in the international sporting realm. If we use our own name, we will lose the chance for our athletes. They will lose the playground, or the showcase they have. The right of our athletes to compete is our utmost concern. And I think most Taiwanese understand that."

Ma Xiaoguang, a spokesman for China's Taiwan Affairs Office, told a news conference this month that Taiwan was using the name issue to "politicize" sports. He said the referendum would damage Taiwan's interests but gave no details of measures Beijing might take.

Earlier, China warned that Taiwan would "swallow its own bitter fruit" over the referendum issue.

"There are international constraints on her (Tsai)," Dachi Liao, who teaches political science at National Sun Yat-sen University, told the AP. "She cannot speak out loudly on this; maybe doing something subtly, but never speaking out."

Liao said the referendum is a proxy vote on independence, and China fears it could echo in the ethnic-minority regions of Tibet and Xinjiang.

"People who support changing the name, many of these supporters are pro-independence," Liao said. "The pro-independence people are feeling upset, so they try to find an opportunity to promote this kind of issue even though they know it may not pass."

China has thwarted Taiwan's every move to assert its independence, even in the sporting sphere. Earlier this year, Taiwan lost the right to hold the East Asian Youth Games, under reported pressure from China.

Taiwan held the Summer University Games last year with about 7,500 athletes. China skipped the opening ceremony, but competed in the events. Athletes from Argentina unfurled Taiwan's real flag at the closing ceremony, waving an independence symbol that Taiwan athletes are forbidden from displaying.

The Argentines were reprimanded for breaking Olympic rules, but warmly applauded inside the stadium.

China has warned international airlines and hotels not to use the word "Taiwan" on maps or other material.

The referendum needs one-quarter of Taiwan's 19 million voters to be approved. Liao, the political scientist, doubts it will reach that threshold. If it does, the Chinese Taipei Olympic Committee is likely to ask its membership what to do.

It risks IOC censure if it moves ahead. The IOC is reported to have warned it at least three times not to proceed. If it backs down, it's thwarting the democratic will of Taiwan voters.

"It's insulting to us because everyone knows we are Taiwan," George Chang, the former mayor of Tainan and a referendum organizer, told AP. "Chinese Taipei is not an area or a country. What is Chinese Taipei? Nobody knows. So let Taiwan be Taiwan."

Taiwan participated in the 1972 games as the Republic of China. It boycotted the next several after its United Nations seat was handed to China, returning in 1984 after submitting to the name change and China's rising clout.

Despite the roadblocks, the island of 24 million remains a regional power and placed seventh in the recent Asian Games, fielding a delegation of 550 and boasting stars like badminton's No. 1-ranked woman Tai Tzu-ying.

Alexander C. Huang, who teaches political science at Tamkang University in Taiwan, said the island only faces more isolation if it challenges China.

"Taiwan does not have much leverage or support our noble cause, to get our name right or to get our flag flying," he said. "Maybe in the future ... the atmosphere would lead us to that eventual goal. But not now."

On Saturday, Taiwanese voters will head to the polls for nine other referendums alongside local elections including for same-sex marriage, nuclear power and energy policy.