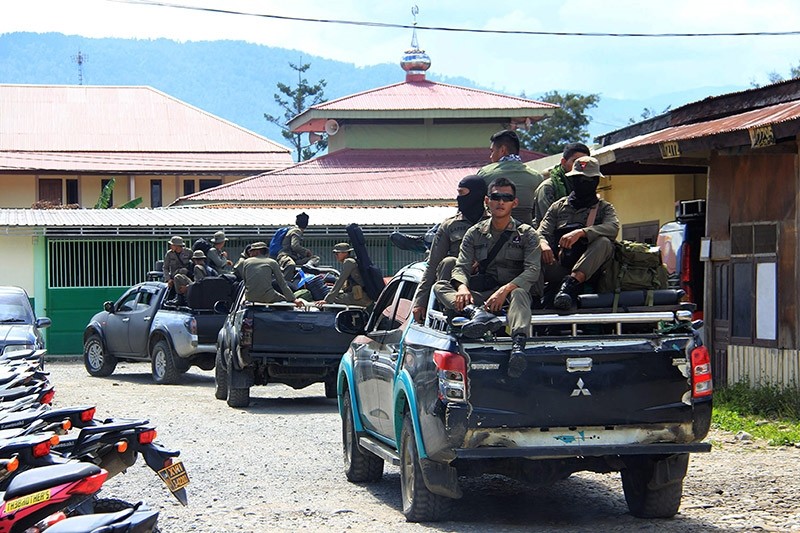 Security forces tried to recover the bodies of 31 construction workers and a soldier who were killed in one of the worst separatist attacks in Indonesia's restive province of Papua, officials said Tuesday.

Eight other workers fled to the nearby house of a local parliament member, but an armed group came a day later and killed seven of them, Diaz said, citing reports from several witnesses. The eighth managed to escape and remains missing.

"This is the worst attack launched by the armed criminal group recently amid intensified development by the government," Diaz told The Associated Press.

Indonesia's government, which for decades had a policy of sending Javanese and other Indonesians to settle in Papua, is now trying to spur economic development to dampen the separatist movement.

Diaz said security forces were trying to recover all 31 bodies but they were scattered and guarded by gunmen in the district, a stronghold of separatists who have battled Indonesian rule in the impoverished region for nearly 50 years.

Basuki Hadimuljono, the minister of public works and people's housing, told reporters in Jakarta on Tuesday that the victims were among dozens of construction workers from Sulawesi island who have been employed by PT. Istaka Karya, a state-owned construction company, to build bridges along a 278-kilometer (174-mile) road project connecting the cities of Wamena and Agats.

The workers are considered outsiders by the separatists.

Hadimuljono said work on all 35 bridges had been halted and would resume when security returns to normal.

Diaz said a number of motorcycle taxi drivers who were migrants from Java and other Indonesian islands also died recently in attacks by suspected separatists who viewed them as outsiders.

Papua, a former Dutch colony in the western part of New Guinea, was incorporated into Indonesia in 1969 after a U.N.-sponsored ballot that was seen as a sham by many. A small, poorly armed separatist group has been battling for independence since then.

The low-level insurgency has plagued the mineral-rich region, which is ethnically and culturally distinct from much of Indonesia.

Police said a witness had provided information that a worker had photographed a group of people attending a ceremony marking Dec. 1, which many Papuans consider the anniversary of what should have been their independence. A declaration of independence from Dutch rule on Dec. 1, 1961, was rejected by the Dutch and later by Indonesia.

Commemorating the day is prohibited in Indonesia, and the witness said the photography caused anger and could have triggered the attack. However, Diaz said it was unclear whether there was a connection.