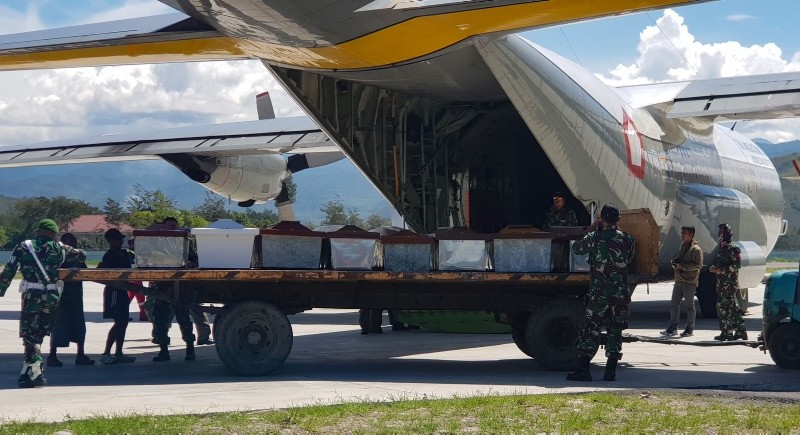 The recent massacre of civilian workers by separatist rebels in Indonesia's restive Papua province has cast a spotlight on one of the world's longest-running insurgencies, with no end to the bloody conflict in sight.

The killings are a marked escalation from decades of mostly sporadic skirmishes between poorly armed and disorganized guerrillas and a powerful Indonesian military accused of human rights abuses against civilians.

Rebels demanded that the government hold negotiations on their territory's self-determination and warned of more attacks following a raid on a construction site that left at least 16 dead and three others missing.

An insurgency has simmered in mineral-rich Papua since the early 1960s, when Indonesia annexed the region that was a former Dutch colony. It was formally incorporated into Indonesia in 1969 after a U.N.-sponsored ballot that was seen as a sham by many. More recent grievances fanned by marginalization of the ethnic Melanesian population and widespread rights abuses, including extrajudicial killings.

Sebby Sambom, spokesman for the West Papua National Liberation Army, the military wing of the Free Papua Movement, said in a telephone interview Friday that they attacked a government construction site last weekend because they believe the project is conducted by the military.

Security forces have retrieved the bodies of 16 workers hired to build bridges on a section of the trans-Papua road, Papua police spokesman Suryadi Diaz said.

Authorities believe the armed group killed 19 workers, based on the accounts of survivors. They have rescued 24, including seven workers, and are searching for two missing as well as the bodies of three others. A soldier at a military post near the site was also killed.

Indonesian President Joko "Jokowi" Widodo has ordered the military and police to arrest the perpetrators of the worst separatist attack during his administration and said he will not tolerate "armed criminals" in Papua or the rest of the country.

He said the attack will not dissuade his government from continuing to develop Papua, including the 4,600-kilometer (2,875-mile) trans-Papua road, which his administration has claimed is widely supported by local people.

The road, which will stretch from Sorong in West Papua province to Merauke in Papua province, is expected to be completed next year and help boost economic development in both provinces, the poorest in Indonesia.

"Trans-Papua road projects are being carried out by Indonesian military and that is a risk they must bear," Sambom said. "We want them to know that we don't need development, what we want is independence."

Indonesia's government, which for decades had a policy of sending Javanese and other Indonesians to settle in Papua to dilute the number of indigenous people, is now trying to spur economic development to dampen the separatist movement.

"Our leaders have declared a war zone since last year and warned that the trans-Papua road construction should be stopped, but Indonesia has ignored it," Sambom said.

He called for the government to agree to peace talks similar to ones that led to another province, Aceh, becoming semiautonomous, or a "real referendum" on independence as occurred in the former Indonesian territory of East Timor.

"If Aceh and East Timor can get that opportunity, why don't we?" said Sambom, who said he was speaking from an area near the border with neighboring Papua New Guinea.

National police chief Tito Karnavian estimated the strength of the armed group at not more than 50 people with about 20 weapons, and said more than 150 police and soldiers had been sent to restore security in Nduga district, a stronghold of the separatists.

Sambom, however, claimed the rebels have 29 operational area commands in Papua, each with 2,500 members.

"We vow to intensify our fight for independence with guerrilla hit-and-run attacks," he said.

"There has never been an attack of this type of scale by separatist guerrillas," said Damien Kingsbury, professor of international politics at Australia's Deakin University.

"The outbreaks of mass violence to date have been perpetrated by the Indonesian military."

Papua, which shares a border with island nation Papua New Guinea, just north of Australia, remained a Dutch colony for more than a decade after the Netherlands relinquished its former East Indies territories to a newly independent Indonesia in 1949.

Despite laying the groundwork for Papuan self-government, the Netherlands came under pressure from a White House fearful about communism spreading across Southeast Asia.

So it agreed in 1962 to place Papua under temporary U.N. administration before it was ceded to Indonesia a year later, on the condition it hold an independence referendum.

The vote -- called the Act of Free Choice -- is widely viewed as a sham. About 1,000 handpicked Papuans unanimously chose to remain part of Indonesia, allegedly under the threat of violence. Jakarta cites the referendum as proof its control is legitimate.

But for some Papuans, who are ethnically different and share almost no cultural ties with the rest of the sprawling archipelago, it was the start of another colonial occupation that has seen them dispossessed of land where their ancestors lived for centuries.

Much of the insurgency has centered around a huge gold and copper mine operated by U.S.-based firm Freeport McMoRan, seen locally as a symbol of environmental devastation and exploitation of Papua's enormous mineral wealth.

Since his 2014 election, President Joko Widodo has overseen an unprecedented development push, including the ambitious the highway, but analysts say it may be too little, too late.

"If Papua is part of Indonesia, it should've been built up in the same way as other regions," said Adriana Elisabeth, a Papua expert at the Indonesian Institute of Sciences.

The depth of discontent was underscored last year when 1.8 million Papuans signed an ultimately unsuccessful petition asking the UN to recognize a self-determination vote.

Most victims of the weekend massacre had their hands tied together with some suffering gunshot or knife wounds and blunt-force injuries, authorities said. One worker was almost decapitated.

The faction of the National Liberation Army of West Papua (TPNPB), which claimed responsibility, is one of the independence movement's most militant groups and its actions could spark copycat attacks, along with a deadly military response, according to the Jakarta-based Institute for Policy Analysis of Conflict.

While the brazen attack may signal an emboldened rebel strategy, the actions taken by a local faction on its own highlight an armed struggle beset by clan rivalries, competing interests and with no formal command structure, analysts said.

Regardless, the killings may hurt an independence movement that has struggled to capture the attention of the international community, Deakin University's Kingsbury said.

It does not receive significant funding or arms from abroad, the group and analysts say.

"Independence has not received much support because Indonesia is a significant international actor with many differing friends," Kingsbury said.

The rag-tag armed movement poses little threat to a country of some 260 million people, but Jakarta has had little success stamping out the insurgency.

The rebels say they remain committed to fighting for independence, while Indonesia has shown no interest in coming to the bargaining table.

"If you tell the government it should hold talks about Papua's independence, they don't want do that," Elisabeth of the Indonesian Institute of Sciences told AFP.