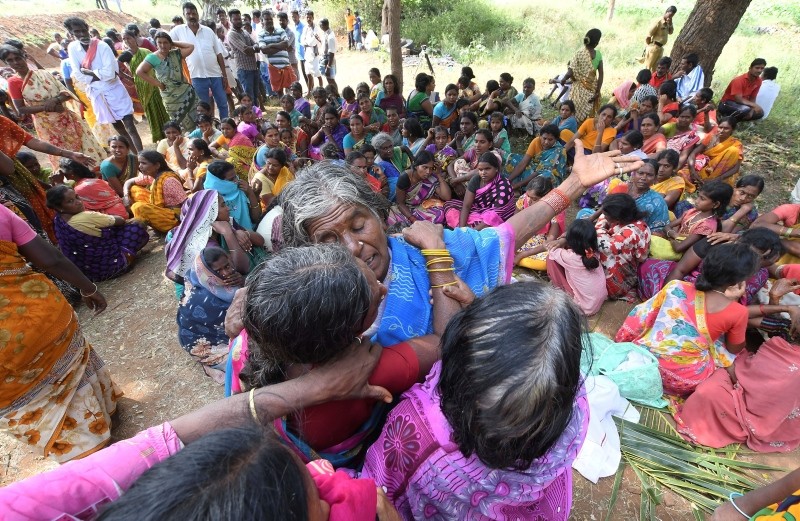 Indian women mourn the death of relatives in a case of suspected food poisoning at Bidarahalli, near Sulawadi village in Chamarajnagar district of Karnataka state, India, Saturday, Dec. 15, 2018. (AP Photo)
by Dec 15, 2018 12:00 am

Eleven people including two children died and more than 90 were hospitalized after consuming a religious food offering at a temple in the southern Indian state of Karnataka, police said on Saturday, calling it a suspected case of mass food poisoning.

Two people have been questioned in connection with the incident on Friday, after devotees fell ill when they ate tomato rice at a Hindu temple. Many people are still being treated for vomiting, diarrhea and respiratory diseases.

Media reports in India said the suspected food poisoning was the result of pesticide contamination but police said it was too early to draw conclusions about the cause.

"We have sent the organs of the dead people and the poisoned food to the forensic laboratory," Geetha MS, a senior police officer in the Chamarajanagara district where the temple is located, told Reuters. "Only after receiving the report can we say what went wrong."

In 2013, 23 school children died in the eastern state of Bihar in one of the worst outbreaks of mass food poisoning in the country. Police had suspected that it was caused by cooking oil that had been kept in a container previously used to store pesticide.

The Karnataka government would provide financial assistance of 500,000 rupees ($6,953.14) to the families of each of the dead, according to media reports.