Koreas break ground on railway project despite sanctions on North 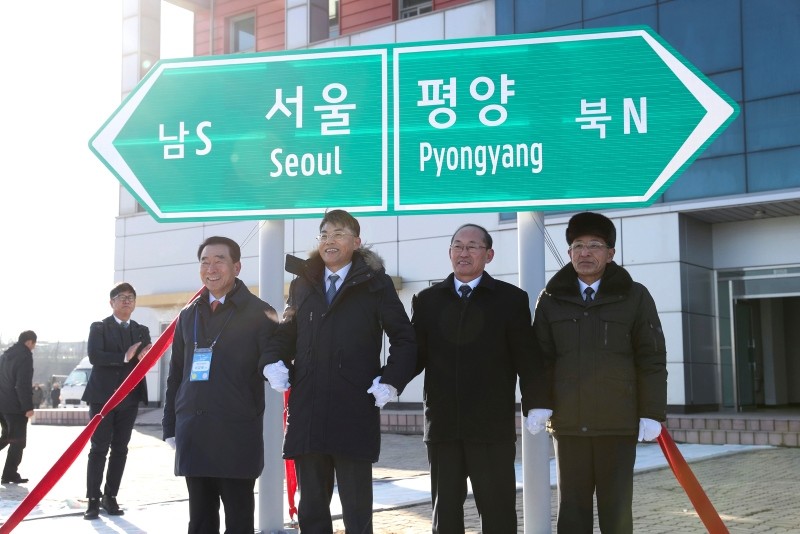 South and North Korean government officials pose in front of a signboard showing both capitals Pyongyang and Seoul during a groundbreaking ceremony at the Panmun Station in Kaesong, North Korea, Dec. 26, 2018. (AP Photo)
by Associated Press Jan 26, 2019 3:56 pm
North and South Korea broke ground Wednesday on an ambitious project to modernize North Korean railways and roads and connect them with the South, but without progress in nuclear negotiations, regular trains won't be crossing the border anytime soon.

The ceremony at the North Korean border town of Kaesong came weeks after the Koreas conducted a joint survey on the northern railway sections they hope to someday link with the South. It's one of several peace gestures agreed between North Korean leader Kim Jong Un and liberal South Korean President Moon Jae-in as they push ahead with engagement amid a stalemate in larger nuclear negotiations between Washington and Pyongyang.

But beyond on-site reviews and ceremonies, the Koreas cannot move much further along without the removal of U.S.-led sanctions against the North.

A South Korean train carrying about 100 people — including government officials, lawmakers and aging relatives separated by the 1950-53 Korean War — rolled into the North Korean border town of Kaesong, where they were greeted by North Koreans including Ri Son Gwon, who heads an agency dealing with inter-Korean affairs.

Officials from China and Russia were also invited to witness the symbolic start of an ambitious project Seoul hopes will one day link South Korea with the Trans-China and Trans-Siberian railways. Armida Salsiah Alisjahbana, executive secretary of the United Nations Economic and Social Commission for Asia and the Pacific, also attended, according to the South Korean ministry.

"The railways will not only reduce time and space but also the distance between the hearts of the South and North," South Korean transport minister Kim Hyun-mee said at the ceremony.

While stressing the importance of the project, Kim Yun Hyok, the North Korean vice railways minister, added an apparent jab at Seoul by saying that the Koreas should push further with engagement instead of "wobbling on the path while listening to what others think."

North Korea has repeatedly voiced displeasure about the slow progress in the reconciliatory projects agreed between their leaders. Seoul's enthusiasm for inter-Korean engagement has also created unease with Washington, which has called for its allies to maintain pressure until Kim takes firmer steps to irreversibly and verifiably relinquish his nuclear weapons and missiles.

The Seoul government plans to conduct further surveys on North Korean railways and roads before drawing up a detailed blueprint for the project. Actual construction will proceed depending on the progress in the North's denuclearization and the state of sanctions against the country, the ministry said.

"We plan to hold detailed negotiations with the North to coordinate on the specific levels we want to achieve in the modernization of railways and roads and how to carry out the project," said Eugene Lee, the ministry's spokeswoman.

Seoul said it received an exemption to sanctions from the U.N. Security Council to proceed with Wednesday's ceremony as it involved South Korean transport vehicles and goods. The Koreas' joint survey of North Korean railways in November, which also required U.N. approval, marked the first time a South Korean train traveled on North Korean tracks.

The Koreas in December 2007 began freight services between South Korea's Munsan Station in Paju and the North's Panmun Station to support operations at a now-shuttered joint factory park in Kaesong. The South used the trains to move construction materials north, while clothing and shoes made at the factory park were sent south. The line was cut in November 2008 due to tensions over North Korea's nuclear ambitions.

The Kaesong factory park was shut down under the South's previous conservative government in February 2016 following a North Korean nuclear test and long-range rocket launch.