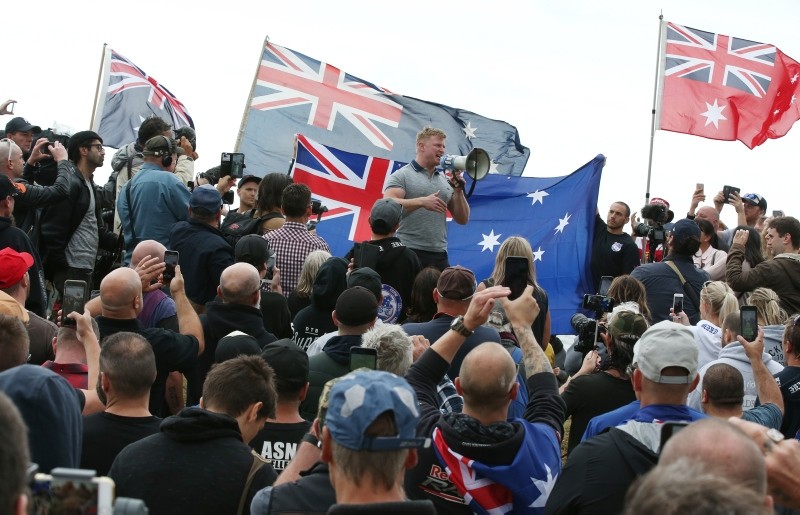 A large Victoria Police presence was broadly successful in keeping the far-right demonstrators and an even larger crowd of counter-protesters apart.

The rally was organised by founders of the United Patriots Front, which conducts anti-immigration demonstrations in Melbourne from time to time.

They said Saturday's protest was against alleged African gang violence and youth crime in the city.

The location of their protest, the inner city suburb of St Kilda, and nearby Caulfield, have sizeable Jewish populations.

Far-right independent senator Fraser Anning — who demanded "a final solution" to immigration in his maiden speech to the Senate last year — attended the St Kilda rally and said it was the "start of something bigger."

"I thank Vic police for their efforts dealing with the ugly racial protests we saw in St Kilda yesterday. Intolerance does not make Australia stronger," Morrison tweeted.

"Australia is the most successful migrant country in the world... Let's keep it that way, it makes Australia stronger."

Victoria Police Superintendent Tony Silva said Saturday there was three arrests but no officers or member of the public were known to have been hurt.

Immigration remains a hot-button issue in Australia amid concern about jobs and overcrowding in major cities.

Nearly half of Australia's 25-million population was either born overseas or has at least one parent born abroad.

Morrison, whose conservative Liberal-National coalition is struggling to hang on to power in a minority government, last year pledged to slash Australia's permanent migration intake to address congestion in the big cities.

But critics of the government said it was pandering to the views of the coalition's right-wingers and other far-right politicians ahead of national elections that have to be called by mid-May.