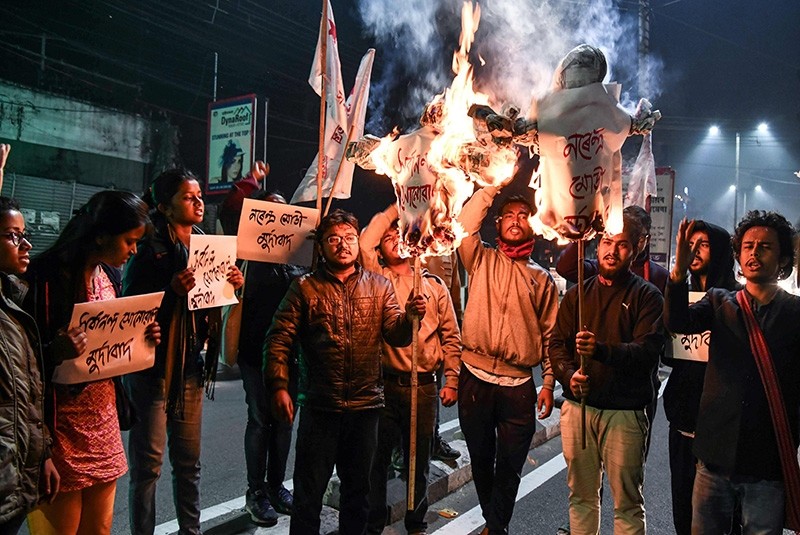 Activists of Students' Federation of India (SFI) burn the effigies of India's Prime Minister and Chief Minister of Assam in Guwahati on Jan. 8, 2019. (AFP Photo)
by Compiled from Wire Services Jan 09, 2019 12:00 am

India's lower house passed on Tuesday legislation that will grant citizenship to members of certain religious minorities but not Muslims, sparking protests in the country's northeast.

The bill covers select groups – including Hindus, Christians and Sikhs – who moved from Bangladesh, Pakistan and Afghanistan and who have lived in India for at least six years.

Muslims are excluded, in what critics say is a transparent pitch by Hindu nationalist Prime Minister Narendra Modi to voters as India gears up for elections due by May.

The legislation, which still needs approval in the upper house, sparked a second day of protests on Tuesday in the northeastern state of Assam, where millions have settled in recent decades after fleeing neighboring countries.

Demonstrators in the state are angry about the bill not because it excludes Muslims but because it grants citizenship to settlers from elsewhere, accusing the migrants of taking away jobs from indigenous groups.

The hilly state of 33 million people known for its tea plantations has been plagued for decades by tensions between tribal and ethnic indigenous groups and settlers from outside the region.

Last year the Assam government published a draft citizens' register that left off 4 million people unable to prove they were living there before 1971, when millions fled Bangladesh's war of independence.

A deadline to provide documents to be included in the registry passed on Dec. 31, and the final list is due to be published on June 30.

In Tuesday's protests in Assam, the All Assam Students Union vandalized offices of Modi's Bharatiya Janata Party (BJP) and set banners and posters on fire.

Samujjal Bhattacharyya, a leader in the union, said that people in the region would not "accept the political injustice perpetrated by the BJP."

Bhattacharya said the legislation would confer citizenship on the basis of religion, violating India's secular constitution. He also said that providing residency and citizenship rights to migrants from Bangladesh, with which Assam state shares a long open border, would threaten indigenous communities.

"We have identified the stone pelters by seeing video footage and they will be booked soon," Assam police official Surjeet Singh Panesar said.

The issue of illegal immigration from Bangladesh has spurred periodic public uprisings in Assam since the Indian government granted rights to Bangladeshis who entered the country after winning independence from Pakistan in a 1971 war.

The bill is unlikely to pass the upper house of Parliament, which isn't controlled by the ruling party. However, if it isn't passed, the government could pass an ordinance that wouldn't require lawmakers' approval.

BJP's alliance partner in Assam, the Asom Gana Parishad or Assam People's Party, quit the coalition government on Tuesday to protest the bill.