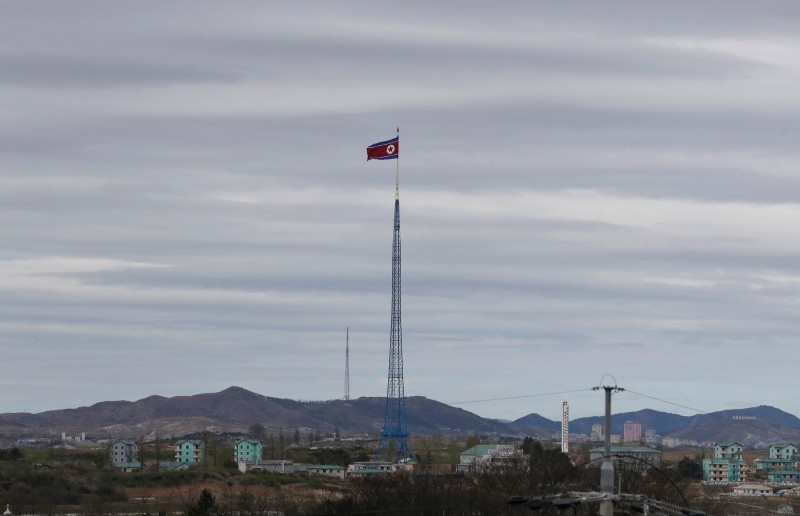 In this April 27, 2018, file photo, a North Korean flag flutters in the wind atop a 160-meter tower in North Korea's village Gijungdongseen, as seen from the Taesungdong freedom village inside the demilitarized zone in Paju, South Korea. (AP Photo)
by reuters Jan 26, 2019 3:56 pm

One of 20 undeclared ballistic missile operating bases in North Korea serves as a missile headquarters, according to a report by the Center for Strategic and International Studies (CSIS) published on Monday.

"The Sino-ri missile operating base and the Nodong missiles deployed at this location fit into North Korea's presumed nuclear military strategy by providing an operational-level nuclear or conventional first strike capability," the report said.

The discovery of an undeclared missile headquarters comes three days after U.S. President Donald Trump announced on Friday that he "looks forward" to another summit to discuss denuclearization with North Korean leader Kim Jong Un in late February.

CSIS, which last reported on the 20 undeclared bases in November, said the Sino-ri base has never been declared by North Korea and as a result "does not appear to be the subject of denuclearization negotiations."

The report noted that missile operating bases would presumably be subject to declaration, verification, and dismantlement in any denuclearization deal.

"The North Koreans are not going to negotiate over things they don't disclose," said Victor Cha, one of the authors of the report. "It looks like they're playing a game. They're still going to have all this operational capability," even if they destroy their disclosed nuclear facilities.

Located 132 miles (212 kilometers) north of the demilitarized zone, the Sino-ri complex is a seven-square-mile (18-square-km) base that plays a key role in developing ballistic missiles capable of reaching South Korea, Japan, and even the U.S. territory of Guam in the Western Pacific, the report said.

Satellite images of the base from Dec. 27, 2018 show an entrance to an underground bunker, reinforced shelters and a headquarters, the report said.