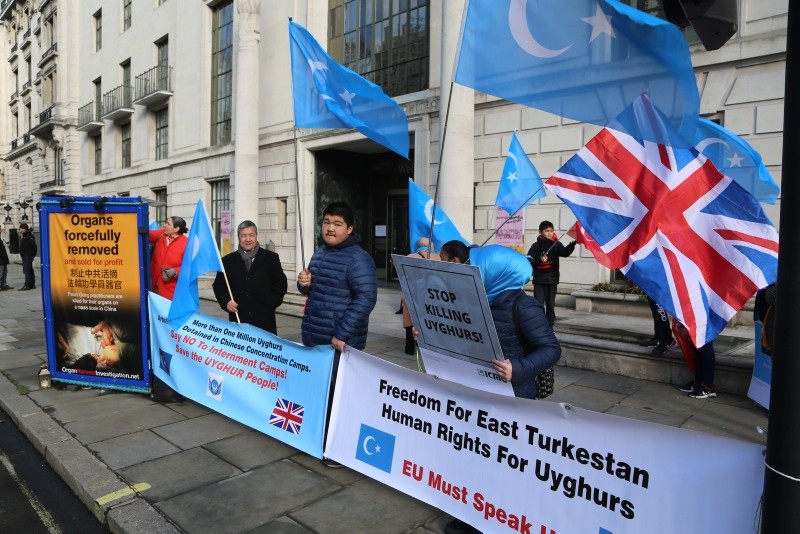 China's human rights violations against the Turkic Uyghur minority in Xinjiang Uyghur Autonomous region, also referred to as East Turkestan, have been protested across the Chinese Consulates worldwide.

The Islamic Community National View (IGMG), one of Germany's largest Muslim-Turkish associations, gathered before the Chinese Consulate in Duesseldorf for protests.

Ergün went on to say that the forced-training camps taught the ideology of the Chinese Communist Party, humiliated Islam. He alleged that those refusing the humiliation against Islam were tortured.

Emphasizing that there were thousands of Uyghurs who were arrested and never heard of again, he said that those looking for their arrested relatives could also be arrested and there wasn't a process in which these people could defend themselves through judicial methods.

"The security units systematically carry out tortures, any attempt to protest the unjust practices of the administration is regarded as uprising or riot. Those attending protests are executed," he said.

Ergün called on the UN to step into action and impose sanctions on the Chinese government during the organization, which was participated by some 500 people despite the rain.

The protests in Germany's capital Berlin were attended by several NGOs, and the crowd dispersed after reading a statement calling on China to put an end to the violations against Turkic Uyghurs.

The protest near the Chinese Consulate in Frankfurt city was attended by some 350 people.

The protest organized by Denmark Islamic Community in capital Copenhagen in front of the Chinese Embassy was attended by hundreds of people and representatives of the Turkish associations operating in the country.

Some 250 people were present at the protests held in the Netherland's Den Haag city near the Chinese Consulate.

In August, the UN Committee on the Elimination of Racial Discrimination, in a meeting held in Geneva, stated that the Uyghur individuals, who the local administrators accuse of having unfavorable political thought, in China's Xinjiang Uyghur Autonomous Region were held in political training centers.

The UN body's representatives stated that up to 3 million people have been detained without any judicial decisions.

Human Rights Watch had previously announced that the Chinese government was conducting a "mass, systematic campaign of human rights violations against Turkic Muslims" in China.