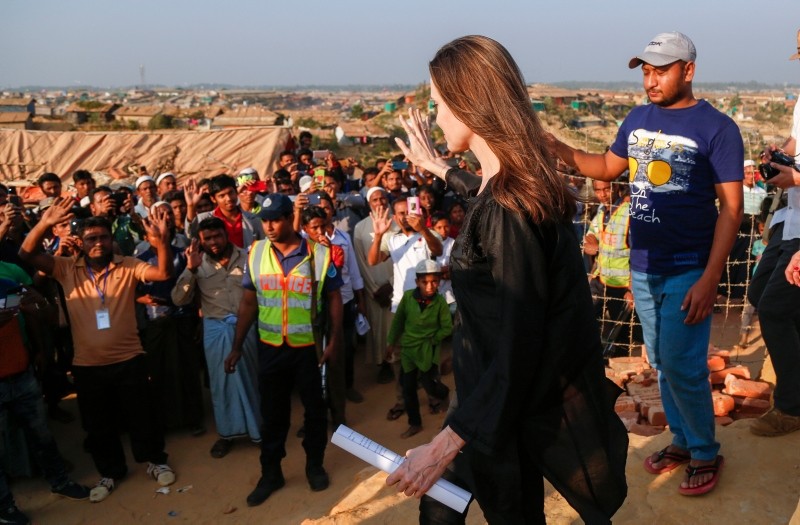 Angelina Jolie said Tuesday that Myanmar must "show genuine commitment" to end violence that has driven hundreds of thousands of Rohingya Muslims into neighboring Bangladesh.

The superstar envoy for the U.N. refugee agency made the comments on the second day of emotional meetings with Rohingya, including rape survivors, in Bangladesh's Cox's Bazar district where some 740,000 Rohingya have taken refuge since August 2017.

There were already about 300,000 in camps before the exodus, which has strained Bangladesh's resources to the limit.

The visit came ahead of a new U.N. appeal to raise nearly 1 billion dollars for the 1 million Rohingya now in the camps around the town of Cox's Bazar.

"It was deeply upsetting to meet the families who have only known persecution and statelessness their whole lives, who speak of being 'treated like cattle,'" Jolie told reporters.

"The Rohingya families I have met are no different from other refugees in one crucial respect: they want to be able to return home," she said.

The latest wave of refugees arrived after a military clampdown in Myanmar's Rakhine state.

Jolie insisted that the refugees should return home "only when they feel safe enough to do so voluntarily and they know that their rights will be respected."

"I met a woman yesterday, a survivor of rape in Myanmar, and she told me, 'You would have to shoot me where I stand before I go back without my rights,'" the 43-year-old said.

"The responsibility to ensure those rights and make it possible for the Rohingya people to return to Rakhine state lies squarely with the government and the authorities in Myanmar," she added.

She called for an end to violence in Rakhine, which U.N. officials have compared to genocide, and demanded action against the perpetrators.

"I urge the Myanmar authorities to show the genuine commitment needed to end the cycle of violence and displacement and improve the conditions for all communities in Rakhine state," she said.

Jolie has previously met with displaced Rohingya while in Myanmar in July 2015 and in India in 2006.

She will conclude her visit on Wednesday by meeting Prime Minister Sheikh Hasina, Foreign Minister AK Abdul Momen, and other senior officials in Dhaka, a U.N. statement said.

The talks will focus on how the U.N.'s refugee agency can help Bangladesh's efforts for the Rohingya and "sustainable solutions" to settle the persecuted minority, the statement added.