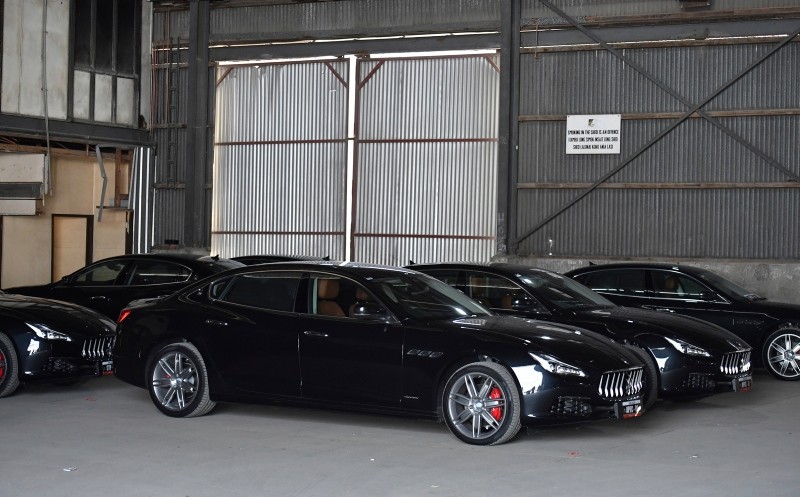 In this Nov. 17, 2018, photo, a selection of Maserati cars, part of the 2018 Asia-Pacific Economic Cooperation (APEC) forum transportation, are seen in Port Moresby, Papua New Guinea. (Mick Tsikas/AAP via AP)
by Compiled from Wire Services Feb 14, 2019 12:00 am

A Papua New Guinea police superintendent is hot on the trail of one of the many high-end cars he's trying to recover after an international summit.

An estimated 284 cars are missing or overdue in the impoverished Pacific nation since it hosted the Asia-Pacific Economic Cooperation (APEC) summit in November. Many denounced the country at the time for buying 40 expensive Maseratis to ferry around world leaders, cars which it later planned to sell.

"The state assets, especially vehicles purchased by government agencies and authorized for certain purposes, have been claimed by certain individuals through unlawful means," police superintendent and director of PNG Police Transport Dennis Corcoran said in a statement.

"Anyone [who] obtained or is in possession of state assets through illegal means will be arrested and charged."

Corcoran told Reuters in a phone call that the police knew that nine cars were stolen, parts had gone missing and some of the returned cars were "pretty seriously damaged."

Police said 40 Maseratis and three Bentleys had been returned and "are in good condition and locked away."

Government documents show dozens of the sleek Maserati Quattroporte cars -- worth at least $135,000 each -- have resurfaced at a wharf in Port Moresby and will be sold off on February 18.

Three Bentley Flying Spur V8 vehicles worth at least $410,000 each will also be subject to tender.

"We are currently investigating the cars and their status. We are not sure exactly where they are," Royal PNG Constabulary chief superintendent Dominic Kakas told dpa over the phone on Wednesday.

The missing vehicles include Toyota Land Cruisers and Mitsubishi Pajeros, in addition to Fords and Mazdas.

Kakas said the PNG Department of Finance had requested the assistance of police in the recovery of assets purchased over the last three years leading up to the APEC summit.

A police unit has been established to retrieve the assets, Kakas added.

Police have been called in to find an unknown number of the estimated 1,500 vehicles that were bought or donated for the November summit -- which saw leaders from across the region descend on Port Moresby.

When The Associated Press spoke to Corcoran by phone Thursday, he said he was heading to pick up one of the missing cars, which he said somebody had tried to sell.

The thief had disappeared. "The driver absconded, but we got the vehicle."

Police believe six of the nine stolen cars are still around Port Moresby, while three have found their way to Mount Hagen, in the country's rugged highlands. Corcoran was confident of finding them because he has a master list of who signed them out.

"Basically, I know where all 284 vehicles that I've got to collect are," he said.

The government justified the purchase of the sports cars -- which can only be used on the few sealed roads around the capital -- by saying it was in keeping with the prestige of the event.

The disappearance of the vehicles after the summit became a major political headache for Prime Minister Peter O'Neill, who is battling to prevent a vote of no confidence in parliament.

APEC 2018's CEO Christopher Hawkins has written to police to report that five vehicles in their possession have been recovered and four -- three Toyota Prados and one Hyundai van -- remain unaccounted for.

A further 20 vehicles were in use by the Joint Security Task Force that policed the event and have been "retired" and delivered to the finance department.

An unknown number of vehicles are still in use by government departments and agencies, the documents show.

Government spokesman Chris Hawkins had said that many of the vehicles not yet returned were either in government lots or being used by paramedics, firefighters and other public servants.

There are growing concerns that the ultra-conspicuous Maseratis may only have resurfaced for long enough to be bought legally by well-connected firms at a discount price.

It was not immediately clear if a reserve had been placed on the vehicles.

Critics had argued the money used to purchase the cars could have been better spent dealing with chronic social problems in a developing nation where diseases such as polio and tuberculosis have recently re-emerged, as well as suffering a deadly earthquake in 2018.

PNG, with a population of some 8 million people, is the smallest and the poorest of APEC nations.

Despite being rich in minerals, timber, oil and gas, its history of colonialism, political instability and mismanagement of resources has kept the nation impoverished.

The APEC summit, held in November in capital Port Moresby, was the biggest event the country has hosted, hoping to put itself on the world map and lure investment. Aid money poured in from China and Australia to prepare for the event.