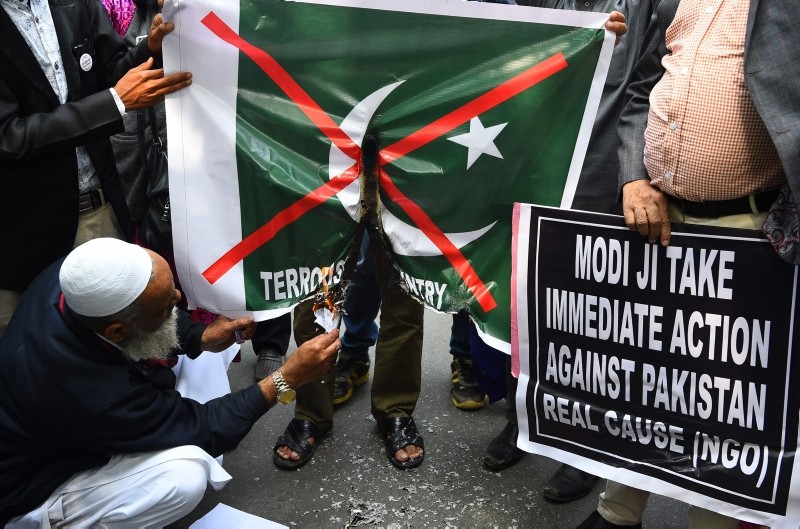 Indian demanestrators burn a Pakistani flag during a protest in New Delhi on February 17, 2019, after an attack on a paramilitary Central Reserve Police Force (CRPF) convoy in the Lethpora area of Kashmir. (AFP Photo)
by Feb 17, 2019 9:35 pm

India has warned against rising communal tensions across the country as Kashmiris living outside their state faced property evictions, job suspensions and attacks on social media after a suicide bomber killed 44 policemen in the region.

The car bomb attack on a security convoy on Thursday, claimed by Pakistan-based militant group Jaish-e-Mohammad and carried out by a 20-year-old Kashmiri man, was the worst in decades of insurgency in the disputed area, which is claimed in full by both the nuclear-armed neighbors but ruled in part.

As the bodies of the paramilitary policemen who died in the attack were returned to families across India this weekend, passionate crowds waving the Indian flag gathered in the streets to honor them and shouted demands for revenge. Pakistan has denied any role in the killings.

Kashmiri Muslims, meanwhile, are facing a backlash in Hindu-majority India, mainly in the northern states of Haryana and Uttarakhand, forcing the federal interior ministry to issue an advisory to all states to "ensure their safety and security and maintain communal harmony".

Aqib Ahmad, a Kashmiri student in Uttarakhand capital Dehradun, said the owner of the house he was staying in had asked him to move out fearing an attack on his property. Rates for air tickets to Kashmir have sky-rocketed as tensions escalate, he said.

Two other students in Dehradun said they also had been asked to vacate their rooms immediately.

"Where are we supposed to go?" Waseem Akram told Reuters, demanding authorities to ensure safety of all Kashmiri students.

Local media reported that some Kashmiri students were assaulted by members of Hindu right-wing groups in Uttarakhand, while a Kashmiri man had been booked by the police in the southern city of Bengaluru under a colonial-era sedition law for a post allegedly backing the militants. Reuters was not able to independently verify the reports.

Police in Jammu and Kashmir (J&K) state said they were providing temporary accommodation to people returning to Kashmir. The police urged Kashmiris to contact their hotline for "speedy assistance in case they face any difficulties/harassment".

"In case it is not done, the person in whose residence such students are living will be considered as a traitor," the man says in the video, whose authenticity Reuters has not been able to independently verify.

Police said they were investigating the matter.

Since the video surfaced on social media on Saturday, at least half a dozen Kashmiri students have been shifted to the hostel of a university campus in Ambala.

A Facebook user named Anshul Saxena, meanwhile, has claimed credit for getting people fired or suspended for posts he calls "anti-national".

Saxena uploaded a screengrab of a suspension letter handed out to a Kashmiri employee of a pharmaceutical company who had allegedly written in favor of the attack.

Government data shows 91 officers lost their lives in Kashmir last year, about 14 percent more than 2017. Thousands of people, including militants and civilians, have died since the insurgency began in late 1980s.

Political leaders from Kashmir appealed to the government to ensure security of Kashmiris across India, while many people on Twitter said their homes were open to Kashmiris seeking shelter.

"Understand the pain and anguish," Mehbooba Mufti, former chief minister of J&K, said in a tweet. "But we must not allow such mischievous elements to use this as an excuse to persecute/harass people from J&K. Why should they suffer for somebody else's action?"