Woman pretending to be pregnant smuggles 2 kittens at Taiwan airport 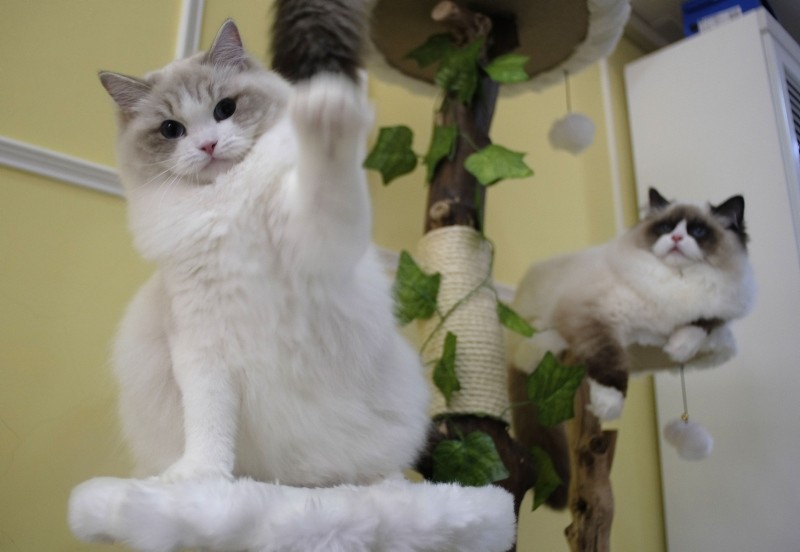 An alleged cat burglar from Hong Kong reportedly smuggled two stolen Persian kittens through Taiwan's biggest airport by hiding them under her clothes and pretending to be pregnant, local media said Tuesday.

The brazen theft prompted authorities at Taoyuan airport to launch an investigation into how the woman was able to breeze through security without her feline contraband being spotted, Apple Daily reported.

The Taiwanese tabloid said police obtained footage from the airport showing the woman, carrying a white bag, leaving a public washroom more plump than when she entered before passing through security.

"It was during feeding time, I went in... with bowls of meat and that's when I saw that the cats were missing," she said inside her apartment in an upmarket suburb of New Taipei City where she has some 40 Persian cats that sell for as much as $3,300 each.

Chang immediately suspected a Hong Kong woman who planned to buy Anngi and had stayed at her house the month before.

Chang changed her mind on the purchase fearing the woman already had too many cats.

"(She) went crazy, she was crying and screaming at me over the phone when she heard the news," she recalled.

Surveillance footage outside Chang's apartment showed the woman leaving through a side door with a cat under each arm, before bundling them into a white bag.

She confronted the woman on Facebook messenger who eventually admitted the theft, according to images of private messages Chang posted publicly on Facebook.

AFP contacted the Hong Kong woman by phone on Tuesday and a man who identified himself as her husband answered.

He said he had no knowledge of his wife's plan and that a friend of Chang's who lives in Hong Kong is now looking after the two cats.

"We are sorry that this incident happened," he told AFP.

New Taipei City Police Department confirmed it was treating the incident as a burglary -- although they have limited recourse given Hong Kong and Taiwan have no extradition agreement.

Taoyuan airport did not respond to requests for comment.

Chang said she planned to travel to Hong Kong in the coming days to pursue legal options.

It is not clear what Anngi and Da Lili's fate will now be.

Cats arriving without documentation in Hong Kong must spend at least four months in quarantine or face being put down. Taiwan only accepts cats from Hong Kong that have a certificate showing they are free of rabies.