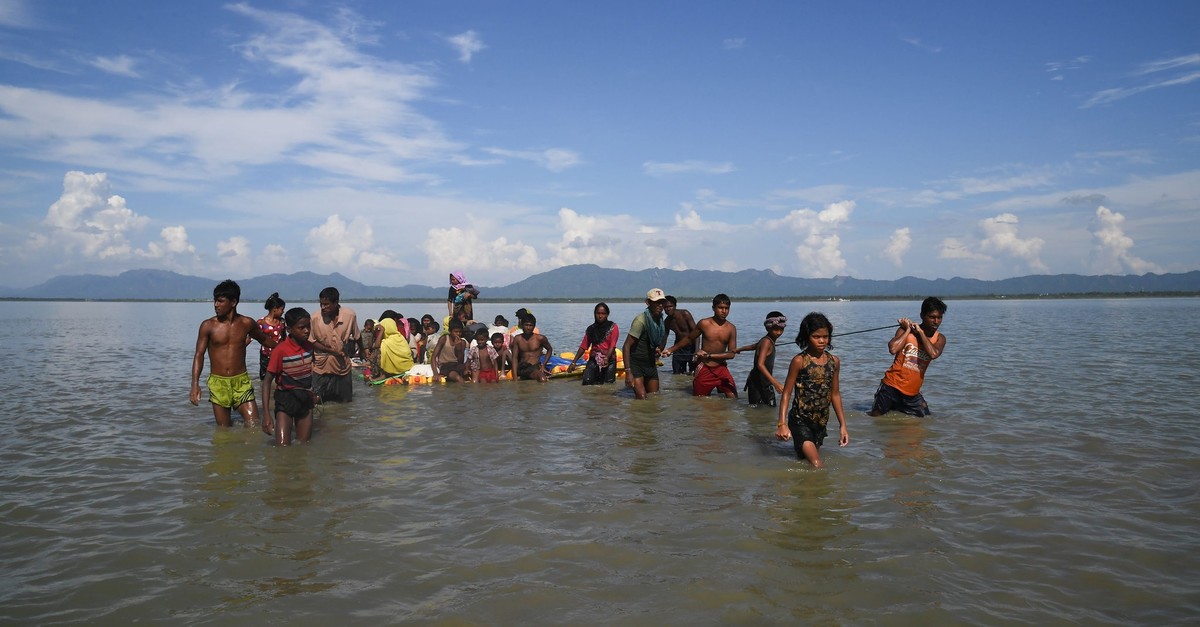 Rohingya Muslim refugees sailing a makeshift raft across the Naf River into Bangladesh at Sabrang, Teknaf district, Nov. 11, 2017.
by Daily Sabah with Wires Mar 02, 2019 12:18 am

After cancelling plans for the repatriation of thousands of Rohingya refugees to Myanmar, Bangladesh told the U.N. Security Council that it cannot take any more refugees from Myanmar.

After a renewed flare-up in violence in Myanmar's northern Rakhine State, new refugees are still crossing the border into Bangladesh, Foreign Secretary Shahidul Haque said. "I regret to inform the council that Bangladesh would no longer be in a position to accommodate more people from Myanmar," Haque said. He accused Myanmar of "hollow promises and various obstructionist approaches" during negotiations on returns. "Not a single Rohingya has volunteered to return to Rakhine due to the absence of conducive environment there," he added. Myanmar says it has been ready to accept returning refugees since January, but the U.N. says conditions are not yet right for their return.

The U.N. human rights office said it continued to receive reports of ongoing violations against Rohingya still in Myanmar and urged Dhaka to reconsider. "We are witnessing terror and panic among those Rohingya refugees in Cox's Bazar who are at imminent risk of being returned to Myanmar against their will," U.N. High Commissioner for Human Rights Michelle Bachelet earlier said in a statement. The aid groups stated that while it is true that Rohingya refugees want to return to their homes in Myanmar, they consistently say they will only do so after Myanmar guarantees their citizenship, freedom of movement and physical safety.

The huge exodus of Rohingya began in August last year after Myanmar security forces launched a brutal crackdown following attacks by an insurgent group on guard posts. The scale, organization and ferocity of the operation led to accusations from the international community, including the U.N., of ethnic cleansing and genocide. Most people in Buddhist-majority Myanmar do not accept that the Rohingya Muslims are a native ethnic group, viewing them as "Bengalis" who entered illegally from Bangladesh, even though generations of Rohingya have lived in Myanmar. Nearly all have been denied citizenship since 1982, as well as access to education and hospitals.