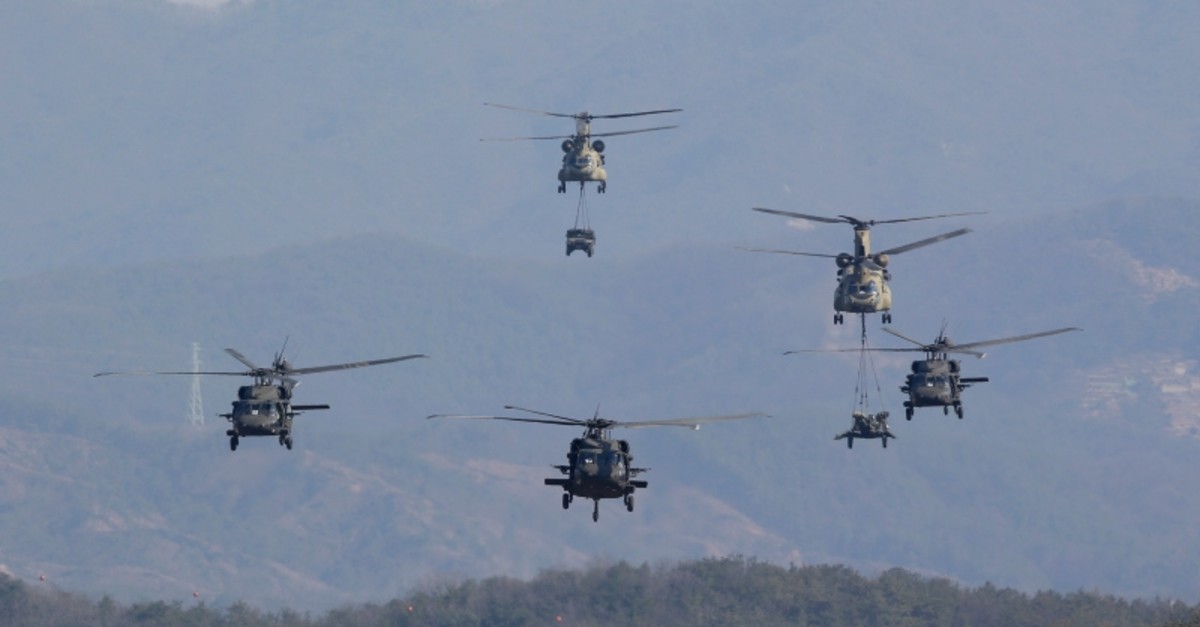 South Korea and the U.S. are eliminating their massive springtime military drills and replacing them with smaller exercises in what they call an effort to support diplomacy aimed at resolving the North Korean nuclear crisis.

The decision announced by both countries Sunday came after President Donald Trump complained about the cost of joint drills even as his high-stakes second summit with North Korean leader Kim Jong Un in Vietnam collapsed last week.

The drills' cancellation is an olive branch to North Korea, which has viewed them as an invasion rehearsal. But it will likely raise worries about how the allies will maintain their readiness in the event that military tensions erupt again in the wake of the failed nuclear summit.

The Pentagon said in a release the U.S. and South Korean defense chiefs decided to conclude the Key Resolve and Foal Eagle series of exercises. It said the allies agreed to maintain firm military readiness through newly designed command post exercises and revised field training programs.

Acting U.S. Secretary of Defense Patrick Shanahan and South Korean Defense Minister Jeong Kyeong-doo "made clear that the alliance decision to adapt our training program reflected our desire to reduce tension and support our diplomatic efforts to achieve complete denuclearization of the Korean Peninsula in a final, fully verified manner," the statement said.

Jeong expressed his regrets at the lack of agreement at the Trump-Kim summit but still hopes that Washington and Pyongyang would continue negotiations, the South Korean statement said.

The new training, dubbed "Dong Maeng," which means "alliance" in English, starts Monday through March 12. It will focus on "strategic operational and tactical aspects of general military operations on the Korean Peninsula," South Korea's military and the U.S.-South Korean combined forces command said in a joint statement.

According to U.S. officials, the new training will be done in smaller drills, tabletop exercises and simulations, and it will involve smaller units, such as battalions and companies rather than massive formations involving thousands of troops, as they had in the past.

Officials said the Pentagon will focus on smaller exercises and mission essential tasks, which include the ability to integrate airstrikes and the use of other weapons systems, drones, surveillance assets, logistics and communications.

Last November, a month before he resigned as defense secretary, Jim Mattis disclosed that the U.S. and South Korea would scale back and tone down the spring exercises. He said the aim was to avoid setting back diplomacy over North Korea's nuclear weapons. He described it as a reorganization of the exercises, not an end to maneuvers on the peninsula.

Trump has long complained about the cost of military drills with South Korea.

After his second summit with Kim ended without any agreement in Hanoi on Thursday, Trump spoke again about the cost of annual military drills. "It's a very, very expensive thing and we do have to think about that, too," Trump told reporters.

Following his first summit Kim in Singapore last June, Trump caught many in the U.S. and South Korea by surprise by suspending the allies' summertime military drills. He called joint drills "very provocative" and "massively expensive."

The U.S and South Korea also have since suspended a few other smaller joint drills.

Trump has also pushed South Korea to increase its financial contribution for the cost of the 28,500 U.S. troops stationed in the country as deterrence against North Korea. He previously threatened to withdraw troops from South Korea and Japan if they refused to pay more.

The end of the springtime war games will benefit North Korea, which has responded with its own costly military exercises and weapons tests, including firing a new intermediate-range missile over Japan in 2017.

After the Hanoi summit, the U.S. and North Korea blamed each other for the breakdown of the talks. But both sides stopped short of pulling out of negotiations.

The Korean Peninsula remains in a technical state of war because the 1950-53 Korean War ended with an armistice, not a peace treaty.